Take Me To The River #3 : Rocchetta Nervina

Crossing the frontier from France to Italy is not only to chase the perfect espresso but also a feeling of having it all. It might seem strange, but the astonishing difference crossing from France into Italy is real. Is it the smell, the light, the Fiat Punto on the wrong side of the road? 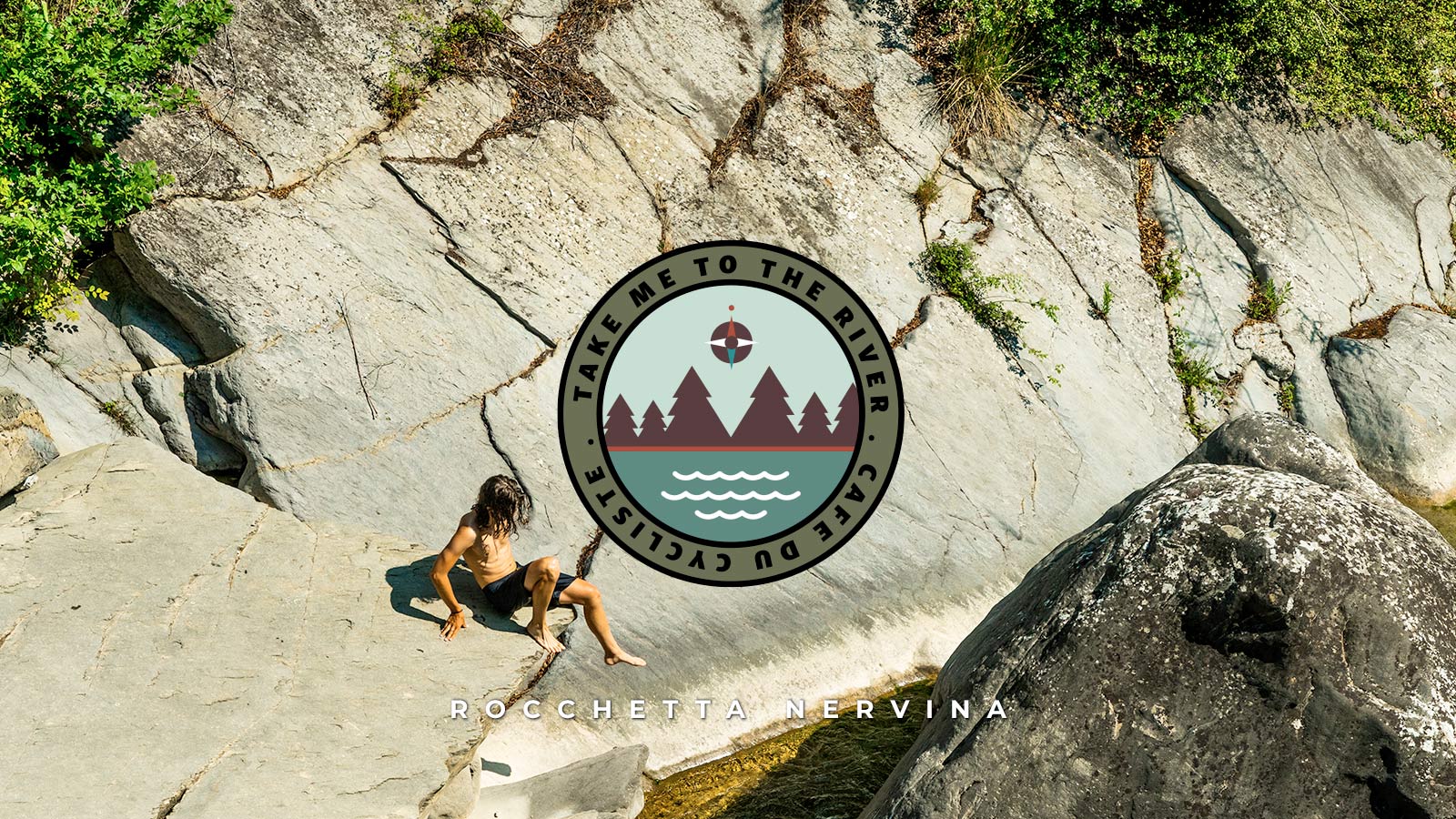 Andrea Mifsud, although he lives in Mougins, has a heritage that also crosses borders. With a mother from the Lombardia region of Italy and father who is half French and half Maltese, Andrea can claim to be fully Mediterranean. He has a strong bond with Italy, which sees him returning regularly for longer rides into the Ligurian hinterlands. With his 20 years of age he’s on the upward curve in his racing career but that doesn’t mean he doesn’ t like to mix it up when doing the longer steady rides – like exploring the Italian olive groves and ending it with a wild swim.

The pastel colors of the old town of Ventimiglia fade into each other, just like Andrea’s jerseys and the roads and city have that Italian hustle and bustle that somehow fades into an almost musical anthem. Andrea adapts to the pace and strikes a vibrant modern flash across and older-looking town, before turning left up the valley towards Dolceaqua and then Rocchetta Nervina situated at the top of the valley amongst olive groves and the foothills of the bigger mountains. The altitude and the steady climate will guarantee a quality production of the olives, just as they do for the professional riders living in Monaco who make a habit of riding to Dolceaqua for a doppio on their recovery days. 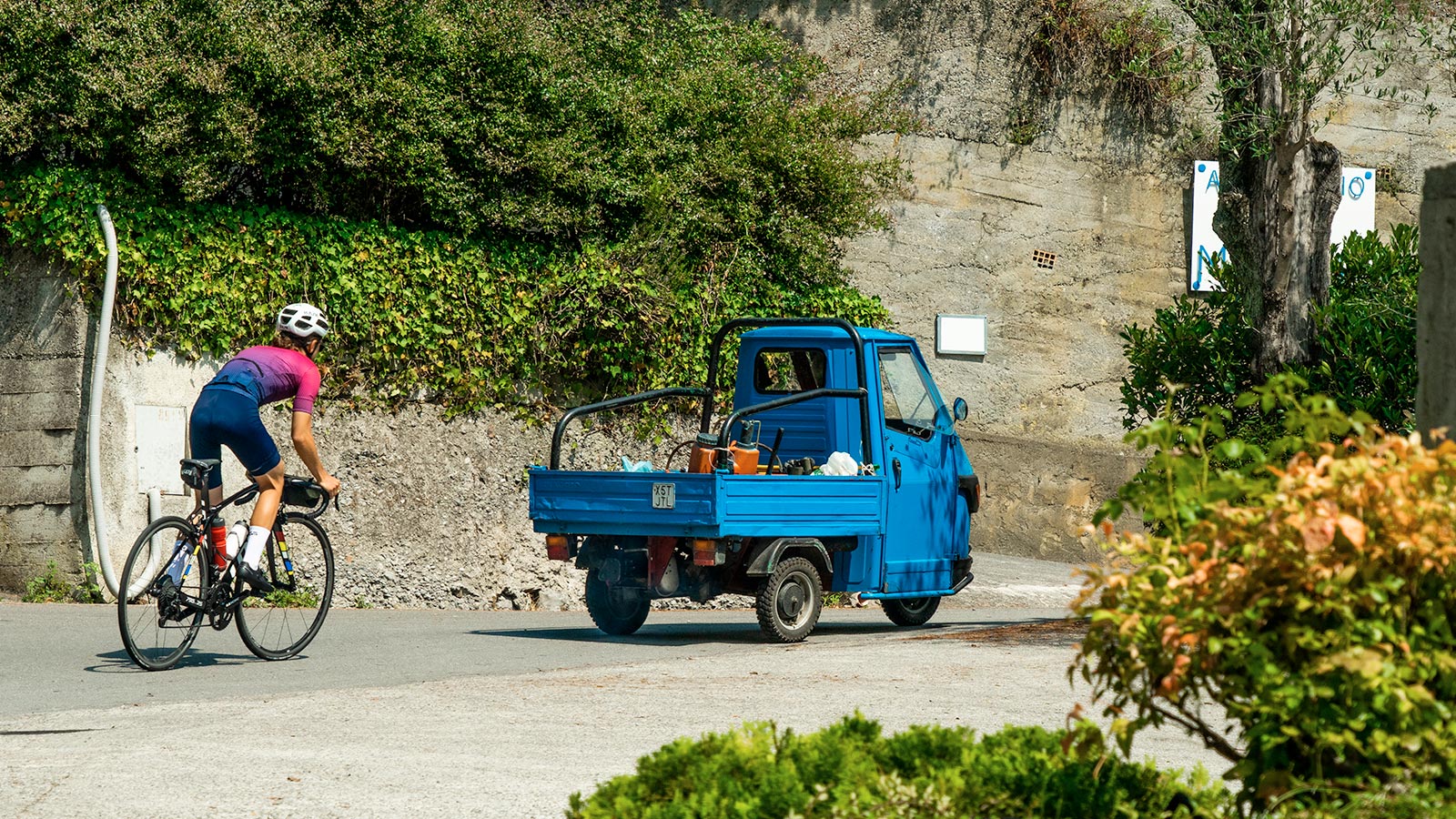 Andrea continues straight through Dolceaqua, keen to get to the river. His plight is helped by an Ape – those traditional 3-wheeled, vespa-engined, flat-bed utility vehicles that serve rural Italy so well. The also provide a nice bit of motor-pacing on the false flats and steady gradients that lead up the valley. Steady, that is, if you stay in the valley. A left turn right before Hotel Lago Bin on the Strada Provinciale 68 climbs up into the olive groves like only an Italian road can. It’s a short loop but it’s a severe one.

Tarmac becomes corrugated concrete, becomes gravel. Secrets only discovered when turning each corner on yet another surface change through the precious Taggiasca olive trees which produce olives with a soft taste of fruit, just like the smell flowing in the air. It is like a kick in the face coming around yet another corner to see one more muro to be climbed on a that a “road” that is only know by the local olive farmers. Surely the Apes can’t make it up here.

Descending directly down into Rocchetta Nervina, with a population of only 275 people, it is quiet. Very quiet. Heads turn to greet Andrea as he slowly enters the square of the former Roman village, which during medieval times brought the pilgrims from Piedmont to the Nervia Valley. Andrea turns left that takes him directly to the most beautiful and clean swim hole just behind the square itself – it’s the most accessible swim hole but somehow having the village as a backdrop makes it a special experience. 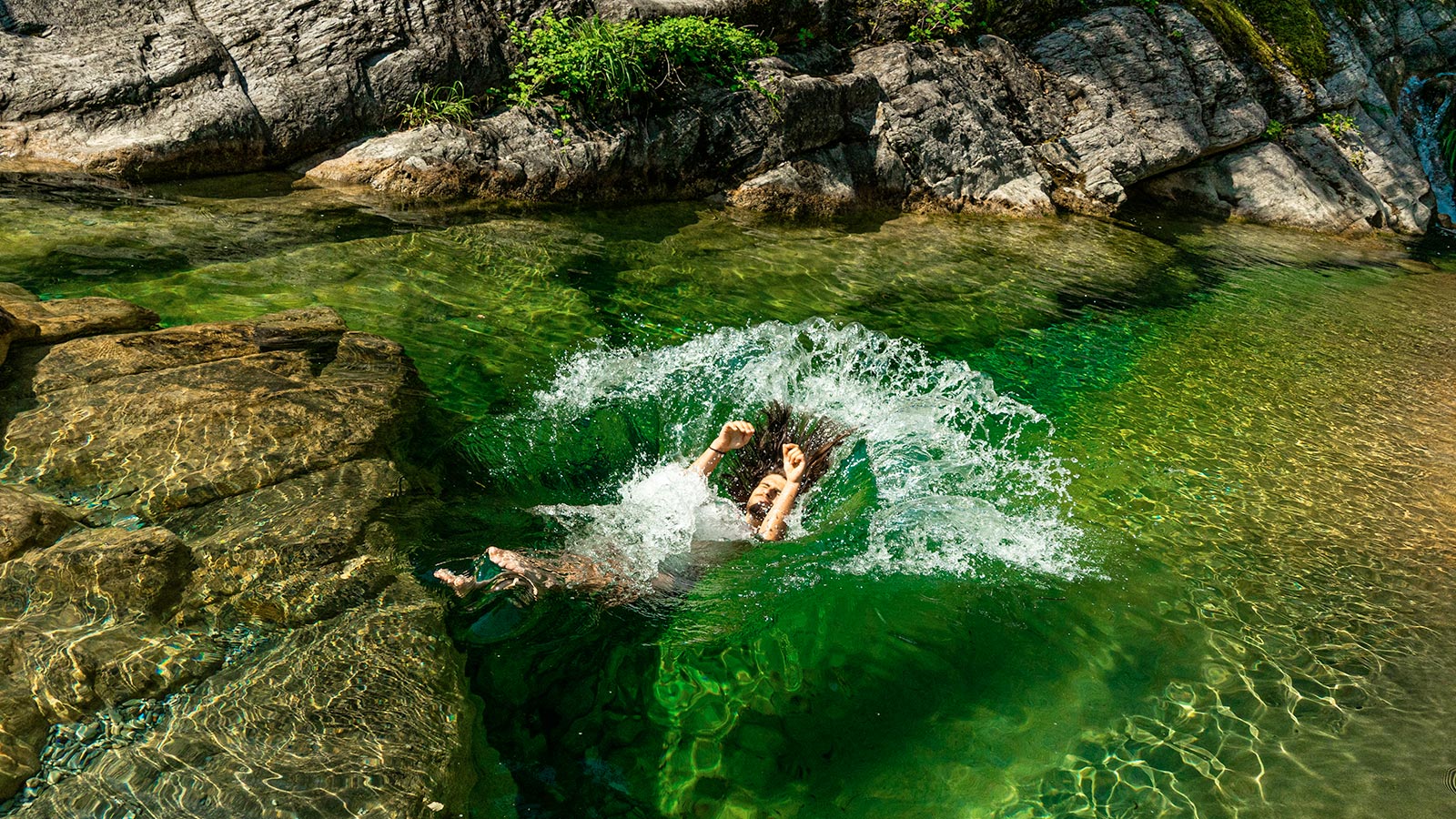 The Savoys brought peace to the village in the 17th century and that feeling has stayed ever since, leaving the place to be a haven of tranquility, even though it is a popular spot. Locals used to go higher up the river to dive in or go canyoning, but recent landslides have put a stop to that. But that doesn’t take anything away from it. The rougher rock face on the left forms a channel with the polished slab of granite on the right, the former providing a place to jump from and the latter a place to dry out and relax on. It is another very chaud summer day of riding and the refreshing mountain water is everything anyone will ever need to cool down.

After drying up and getting back on the bike, Andrea decides it is time to stop at Dolce Aqua. The café on the corner, the well-known spot for riders in the area with a specific flair for the perfect espresso (we are proud of our coffee, but we have to give the Italians respect for what they do with their coffee beans). The contrast of Andrea’s full-on race bike fitted with one of the new-wave handlebar bags filled with his swimming kit draws attention. He falls into conversation with a few locals and before we know Andrea’s Italian side is showing with hand gestures and impassioned stories about his dad. It almost feels like home.

Or simply check out our series of Take Me To The River swim holes.