It’s 6pm on Mont Fourcat, some 2,001m above sea level. (That 1m counts just as much, if not more than the 2,000 before it.) Camille McMillan is clad in white linen, as if to stand out like a beacon against the hues of green, brown and grey that make up the surrounding Pyrenean landscape. Founder and race director, Camille, is literally standing out on the edge of the mountain, looking for the first riders to approach the only checkpoint of the race, where they must meet and greet him in order to advance to the next obligatory sector. They are some three hours behind the anticipated schedule. 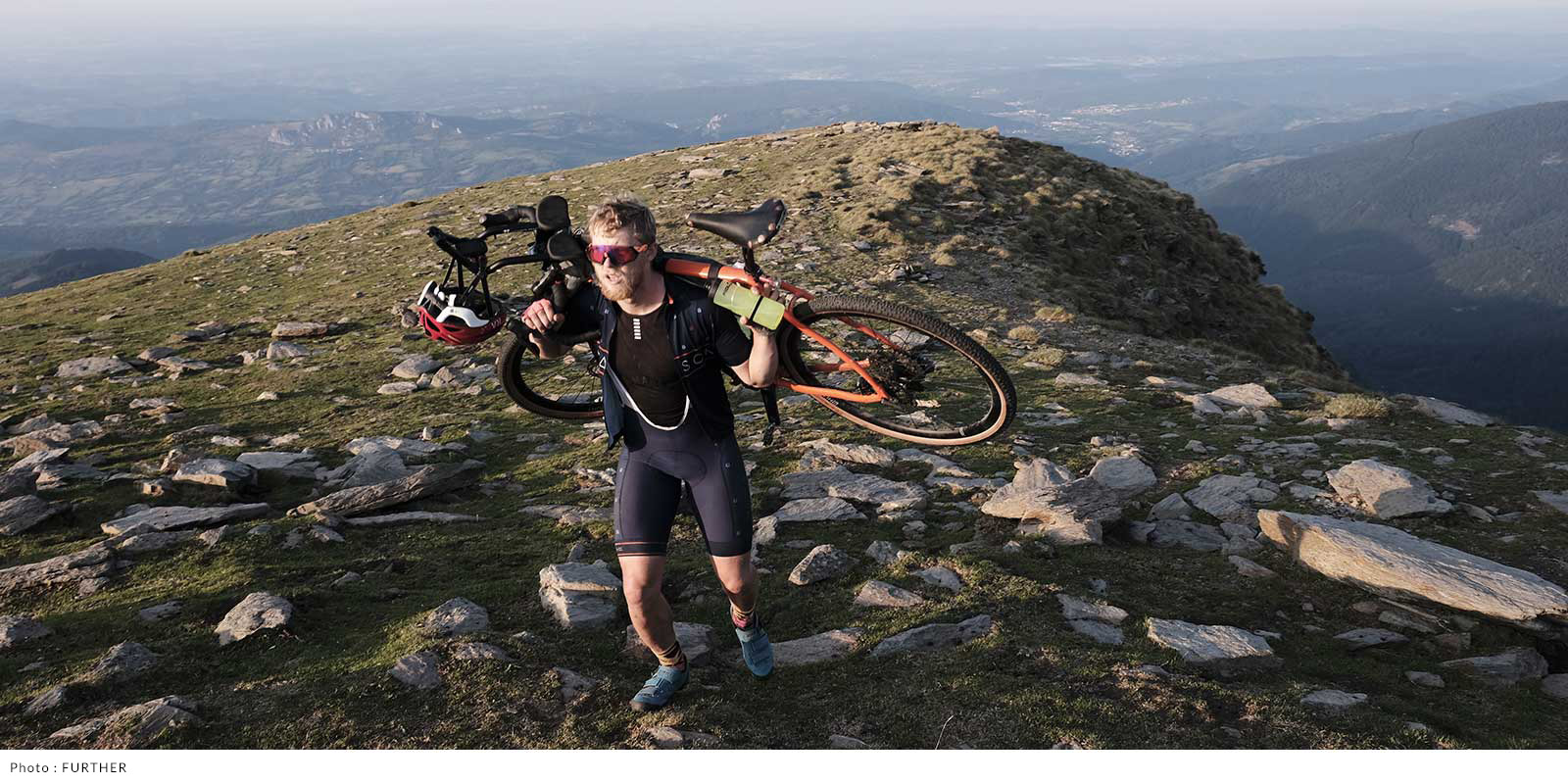 The first rider, illustrator Tim O’Rourke, is spotted as the bike on his back catches the sun that has been burning bright all day. He moves for another ten seconds then sits down exhausted. He’s been hiking that bike for an hour already and although he’s within sight and only a mere kilometre and a half away from the summit, it will take him another hour to actually get there. This…. is Further. 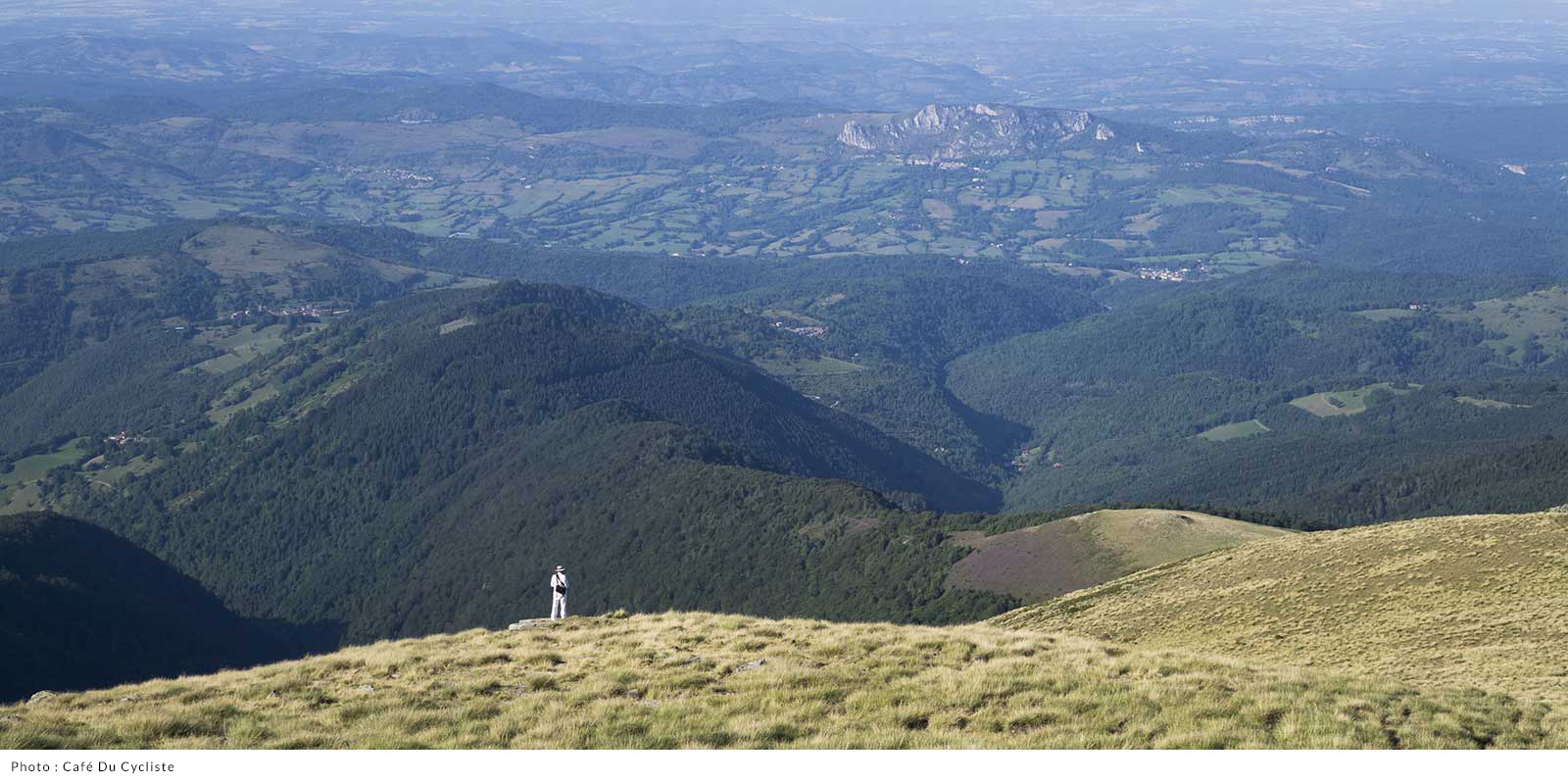 Seven months ago Camille started the process of building a new race. The parcours, its shape, its diversity of surfaces and routes, the twelve obligatory sectors to be completed, all became an obsession. Seven hours ago, the carefully selected group of riders competing in the race’s first edition ran across a field in the plains below the mountains in a Le Mans style start : tipping the hat to the petrolhead endurance events that take place further north. Those riders did not know the parcours like Camille, but that was part of the appeal. A race to take you to places, physically and mentally, that you had never been before, beyond what is available in the ultra-endurance calendar but in a localized loop rather than the more popular point to point format. Comparisons to the infamous Berkley marathons were made in jest, fear or maybe knowledge. No-one was quite sure. 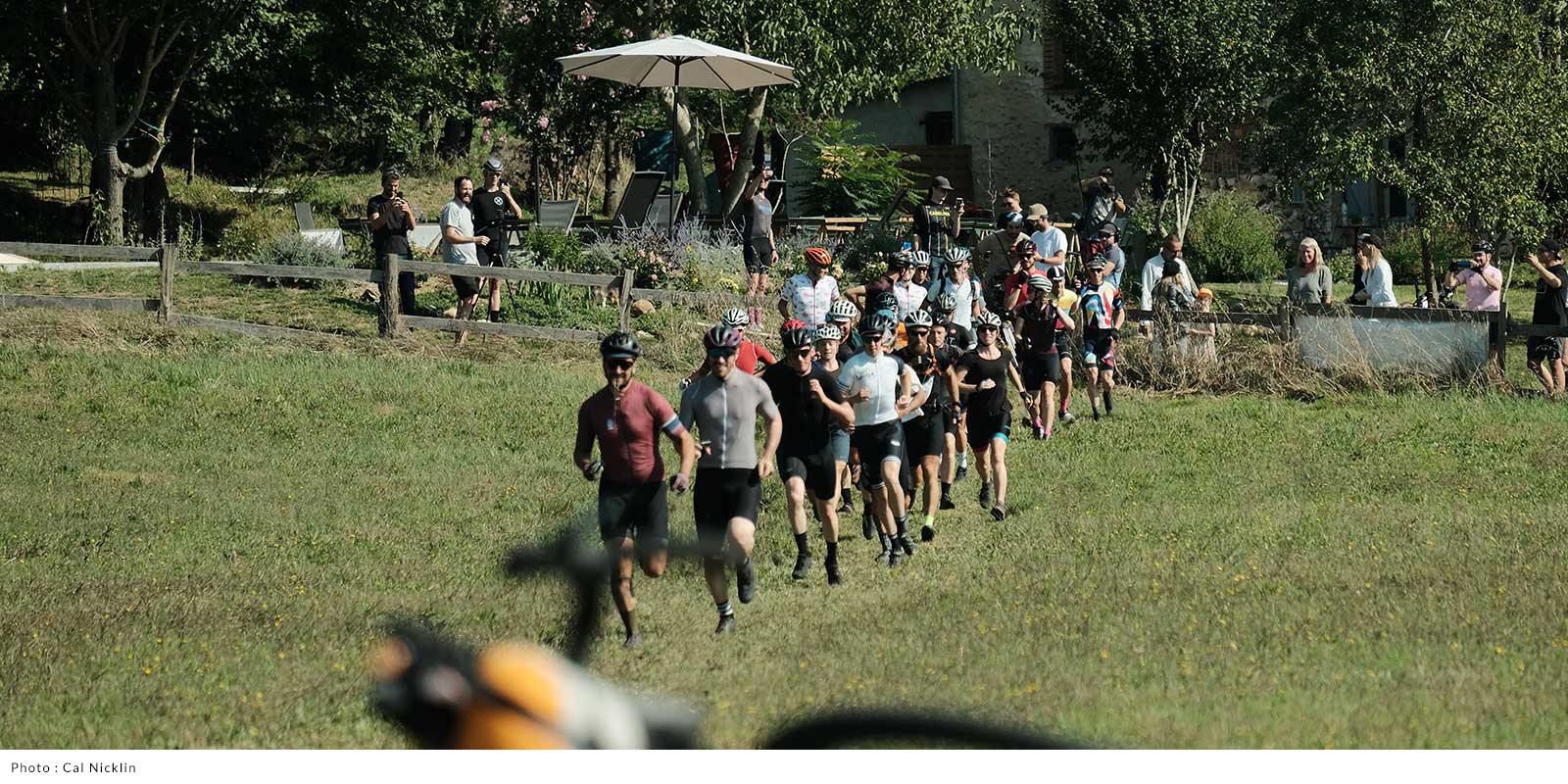 Back on Mont Fourcat, having spotted three dots below (both with eyes and the race GPS trackers) Camille took his place beside the IGN stone and traditional cairn that marked the highest point. For such a slow-moving part of the race it was providing incredible tension, culminating with two riders appearing over the horizon from different directions. Lissen Hockings, competing in her first bike-packing race, came from the west, whilst Tim had continued his battle up a section of the north face which Camille had declared impossible just one hour previously. Already, riders were pushing Further….. And arriving together created a mise-en-scène in a race where both sexes were competing against each other on equal footing. Because, well, this is Further. 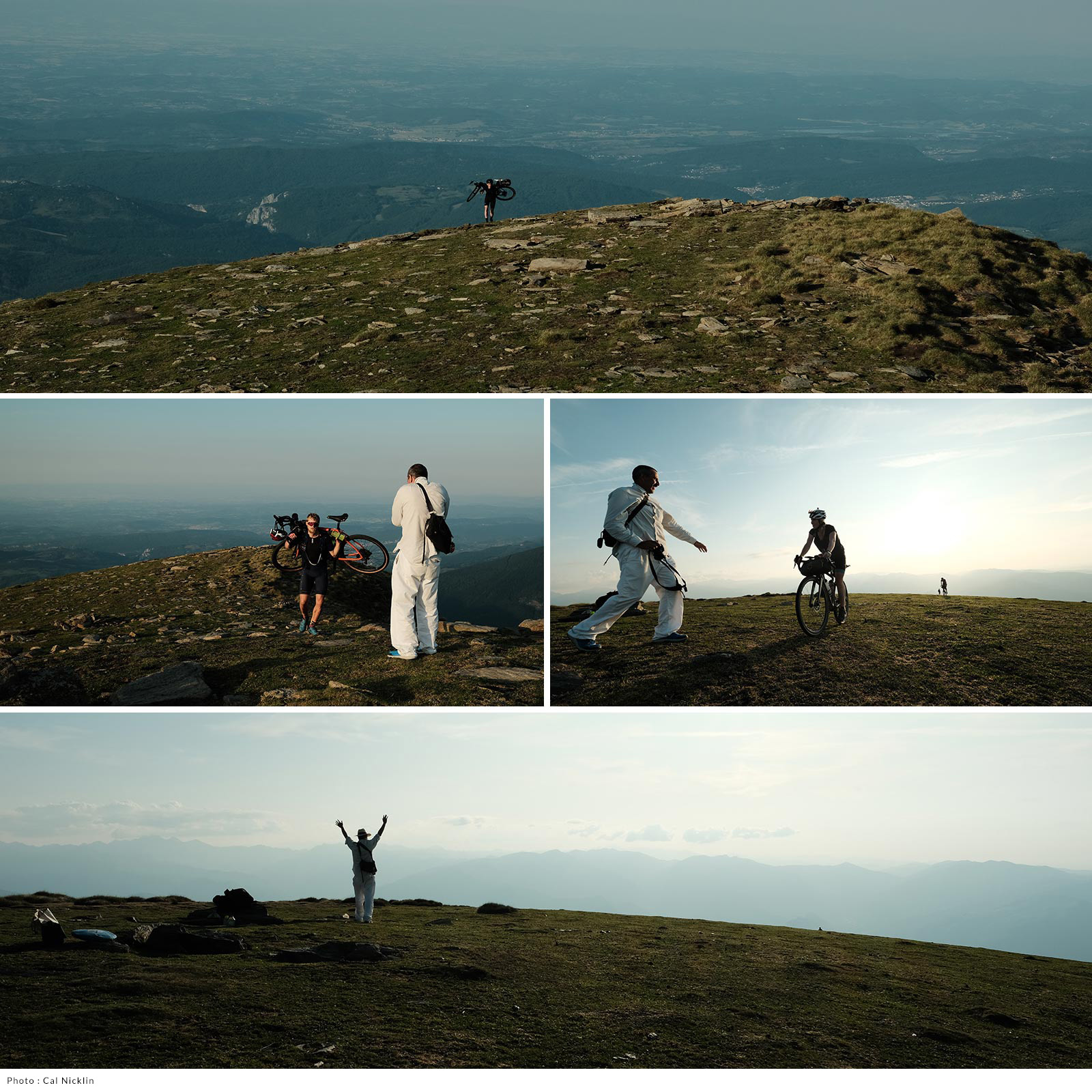 Emma Pooley, former Olympian and multi-discipline World Champion, and Angus Young were third and fourth to arrive at the checkpoint. Emma, also in her first mixed surface bike event, was comparatively fresh whilst Angus was sick and suffering badly. He and Josh Ibbett had been simultaneously vomiting due to heat stroke earlier in the afternoon. Josh had scratched whilst Angus forged on, dropping his saddle bag off his bike in order to make it to the top. This forced him to retrace his steps down the north side of Mont Fourcat and take a different route around to the next sector which started after traversing the Pont du Diable – the Devil’s Bridge.

With riders stretched out all over the course, before and after the checkpoint, Camille stayed alone on the summit until dusk. It was forbidden to ride above the tree line after night fall on this particular part of the parcours. On the descent from the summit, he passed Ingeborg Dybdal Øie as she made her way into the rocky mountain refuge beside the shepherd’s hut. Having realized she wasn’t going much further on day one, she’d left her bike a few hundred metres down the mountain slopes to search a place to sleep. Camille nervously asked her if she hated him. The response was luke warm. She has a high-powered job in Cambridge, but no matter how eloquently she might recount this experience in the board room or next to the coffee machine, not many would understand. She’d made it further than the second half of the field and could make the Checkpoint at sunrise the next day to keep the chase on. 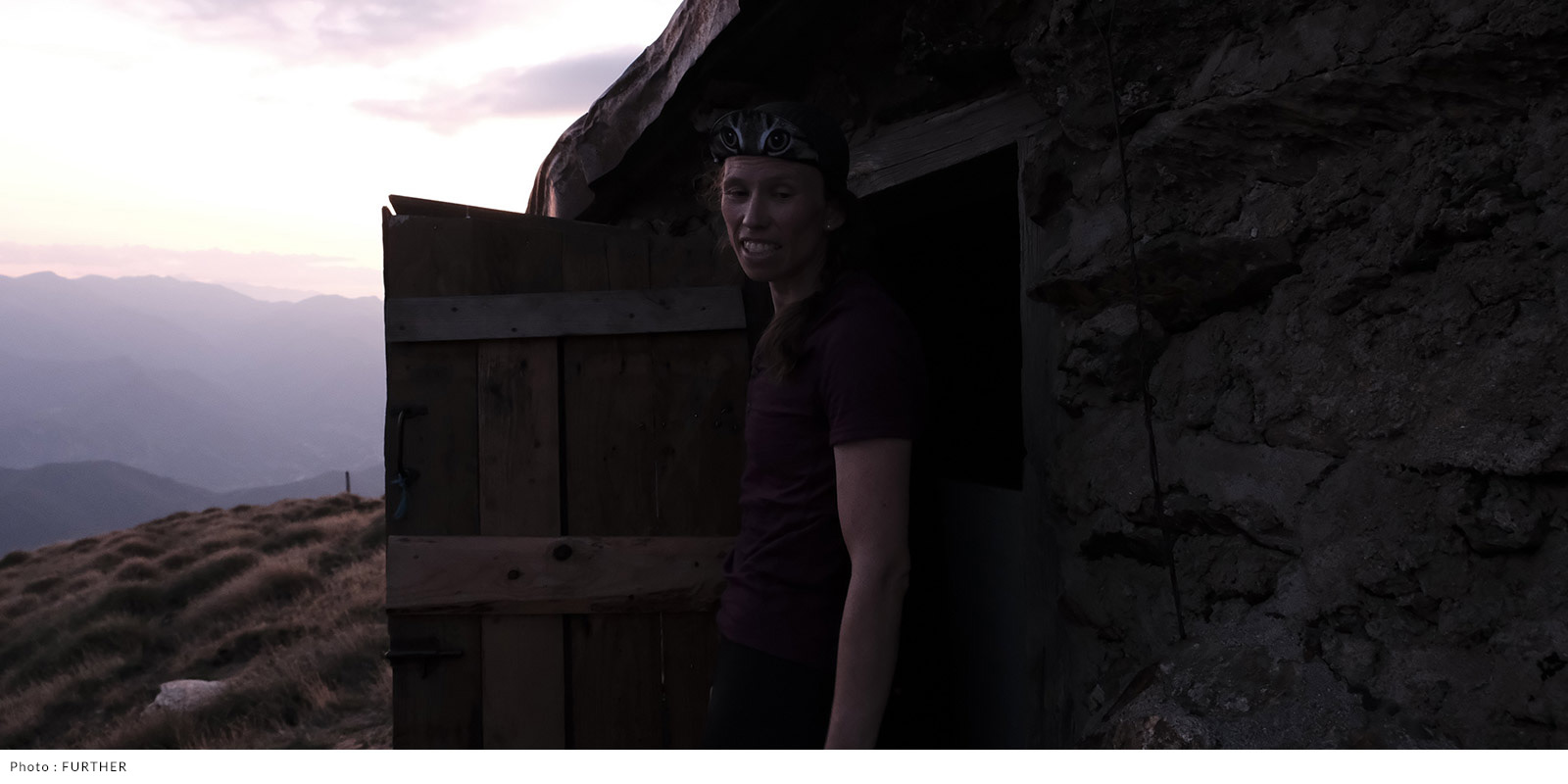 Whilst Ingeborg and the others were sleeping in their various shelters and bivvy bags, the race for the win was forming. Emma and Angus were the two riders who pushed through the night through the next part of the parcours. Sector 4 was a gravel climb through forests leading to the next sector, a classic road climb up the Col du Port. It is testament to the brutality of the race that a 17km climb that has featured ten times in the Tour de France is almost regarded as a liaison between the real tests of the race. And the next pinnacle (pun intended) of the Further parcours lay just due south of the Col du Port – the Port du Rat and into Andorra. It was ‘only’ the sixth sector out of twelve but it turned into the critical point of the race for most riders.

There are only two paved roads in and out of Andorra. Needless to say, the race went the other way. The Port du Rat is 2,540m high, and according to the race director the top section of the sector, “maybe more brutal than Fourcat”…. The French and Andorran governments had agreed to bore a tunnel through the mountain here, but the mountains obviously kicked back because there is no tunnel. There is just a rocky trail through the scree slope and over the top (after you’ve ridden the 20km climb of tarmac and gravel up the valley). Taking the race where other vehicles can’t go, this was the second punch-in-the-face reminder that this is not just a bike race. It’s hike-a-bike ultra-endurance. And once you reach the other side the only way out is more of the same or a very long ride around the mountains back home. Many riders realized this and the prospect was too daunting. They scratched and made the long ride back to base at Zero Neuf where individual racers melted back into the community of supporters and friends. Camping out beside the farmhouse, telling tales, watching the remaining dots and speculating about who would win. 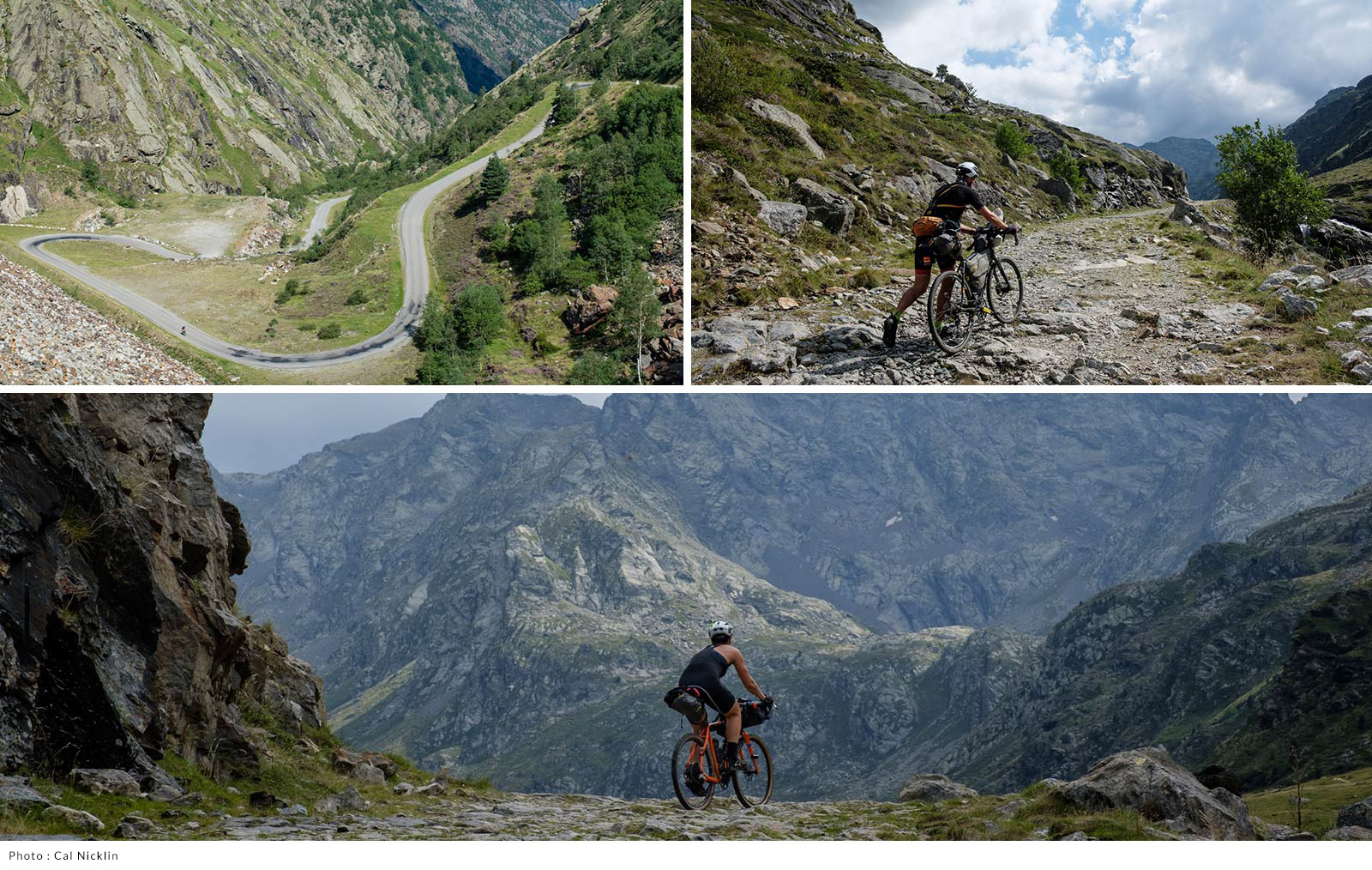 Meanwhile, Emma chased Angus up the valley and passed him near the top, with both of them making it into Andorra by early afternoon. This was important strategically as it enabled them to traverse the principality and get into Spain before nightfall, when border crossing was banned by the rules of the race. And for good reason. On the Spanish side the dirt track that was sector 7 lead to the village of Tor, famous for having 13 houses and 3 murders in recent years due to tobacco smuggling. But Emma and Angus were pushing on and crossed the border well before the police and customs officers would be investigating anyone moving on the mountain. Which meant the next move was to be the first to make it over the Port d’Aula back into France. 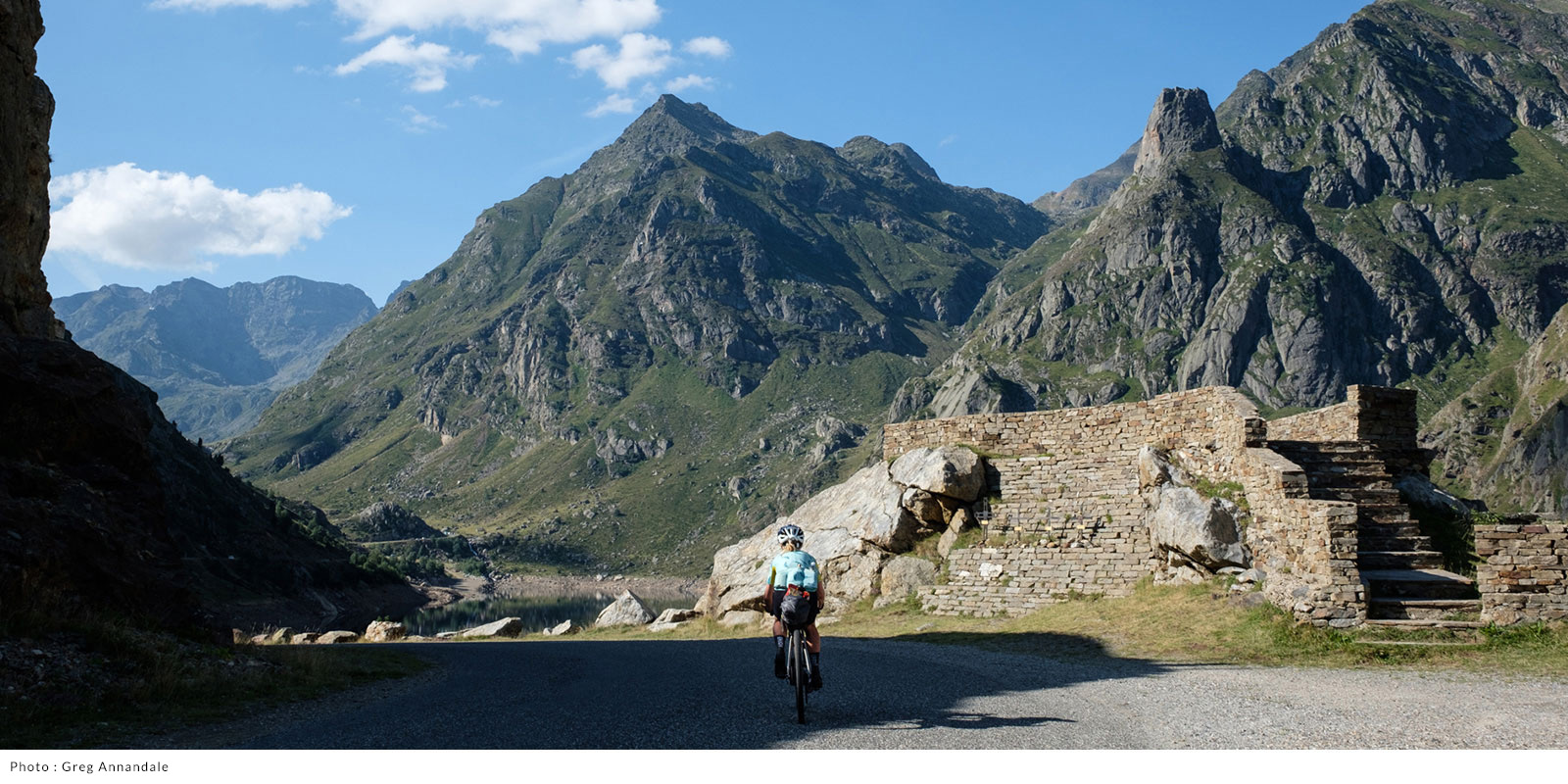 That would be no easy task. Sector 8 was a luxury, in relative terms, being a surfaced road. However, it took the riders as deep as it is possible to go into the Pyrenees. The sector ended at the bottom of an almost vertical kilometer of mountain leading up to the Port d’Aula. It wasn’t an obligatory sector however the next one, Sector 9, started at the top. So the only other option was to take the 160km of paved roads around the mountain and climb up to come down. Which doesn’t really seem like a viable option given what has already passed before. In the early evening, Emma messaged Camille via WhatsApp to ask if there was an option to sleep at the top. This is self-supported racing. Camille refused to answer feeling that any advice he gave would influence her decision and effect the outcome of the race. 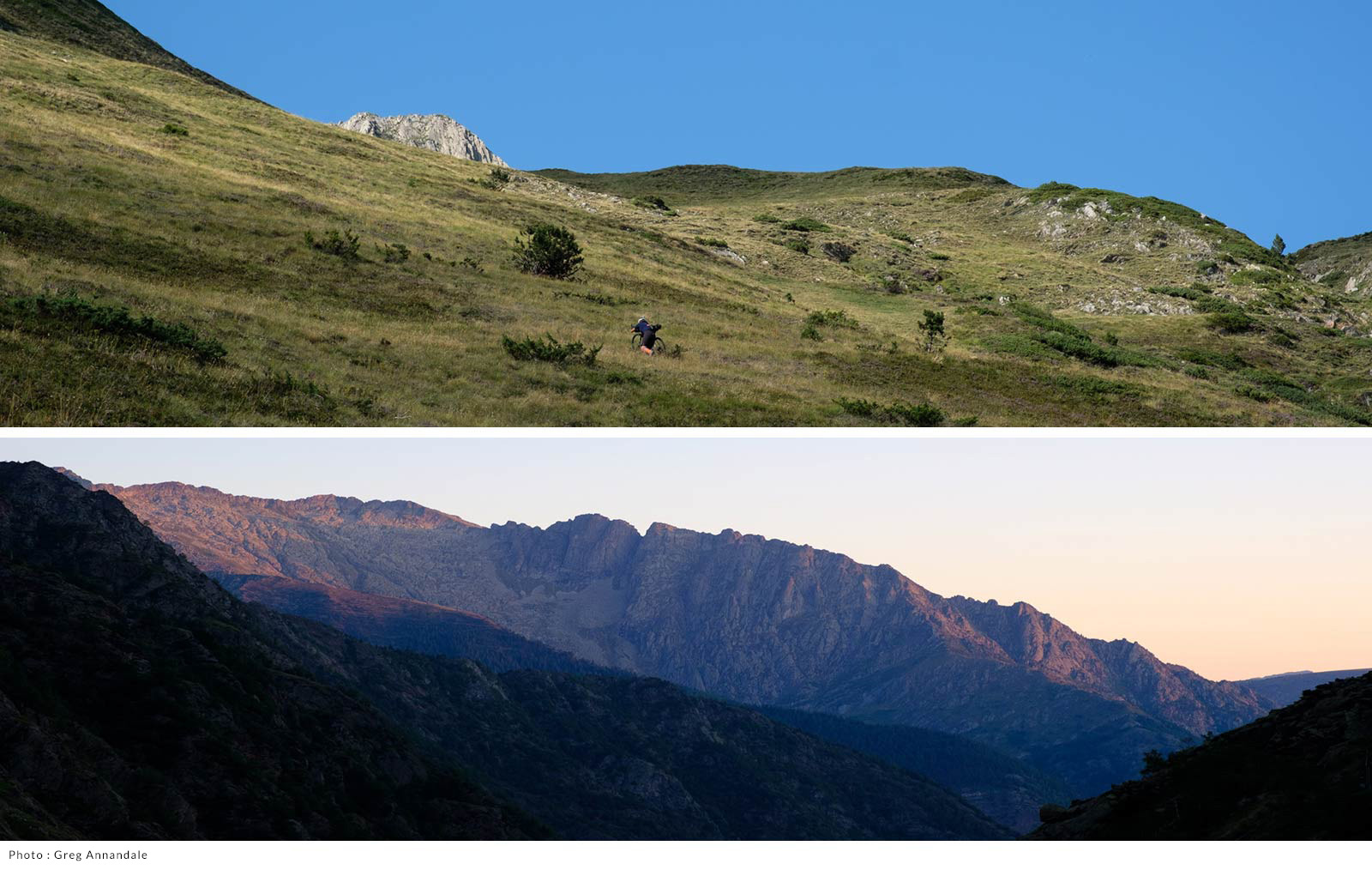 Two riders, two days deep into one of the toughest races of their lives, playing cat and mouse up a wall of mountain in the middle of the night. Angus didn’t stop. To watch the replay of his tracker is to see a 5 hour slog up the steep slopes towards the summit. Emma made a different choice. She bedded down around 10:30pm then woke at 3am and zipped up like a mountain goat, passing Angus to reach the top by sunrise. It’s an extreme way to get a great Instagram photo. She was in her element, her next message to Camille declaring the Port d’Aula to be one of the most beautiful places she’s ever been on a bike. Camille got out of bed at 3am to drive down and greet the leaders on their return to civilization in Pont de la Taule. Emma was seemingly on a high of endorphins and in the zone. Angus, who followed a few hours after was running on empty. The sickness of the first day and all-night hike had taken their toll. 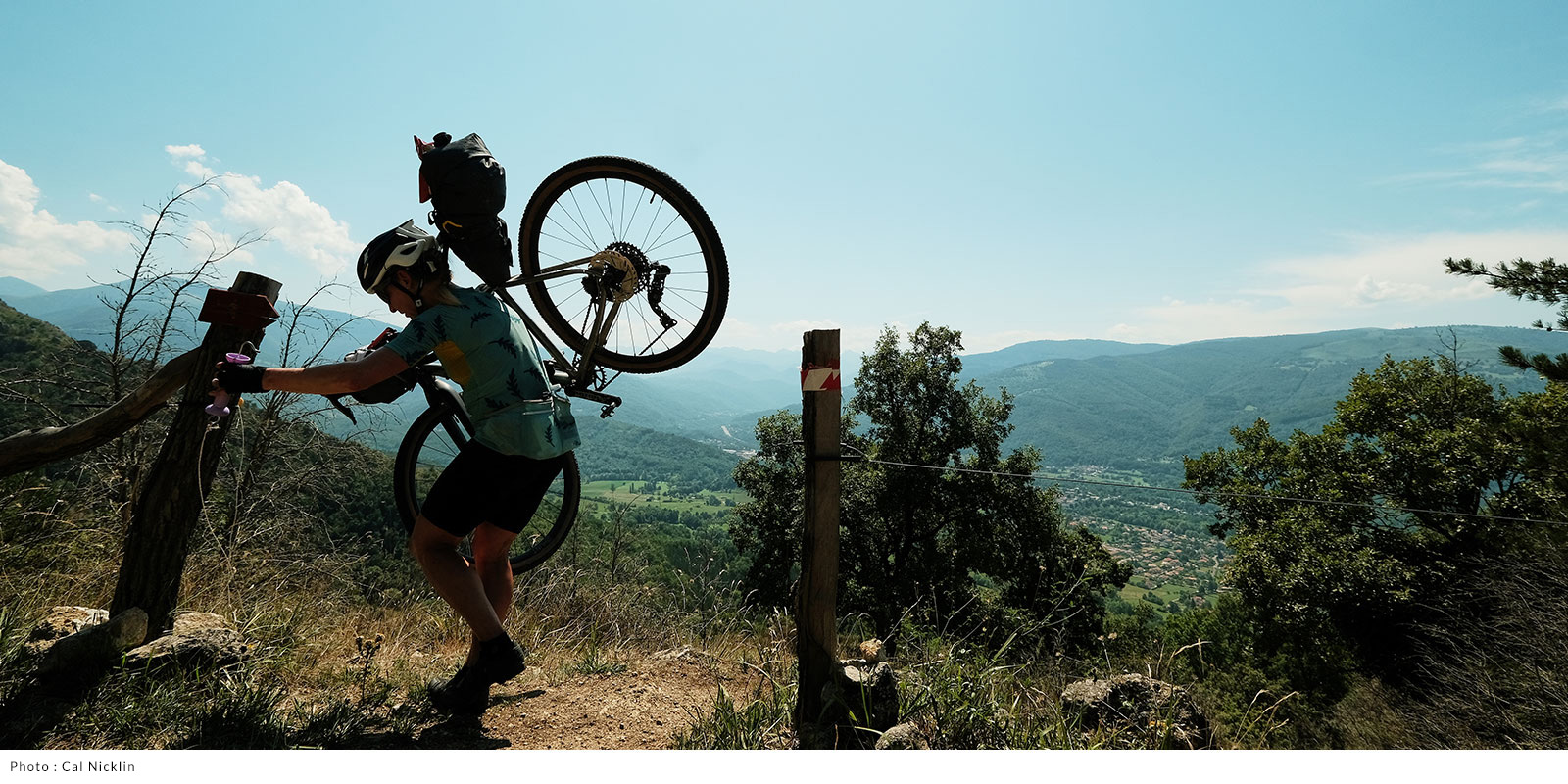 To say Emma's ride to the finish was easy would be a sweeping understatement. But she made it look that way. There was more tarmac on the run for home but there was also sector 11's ascension of the 'Wall of Peguère', then a mix of gravel and tarmac through the forests to the Prat d'Albi and a final gravel section that went, ahem, Further that it maybe needed to. "Damn you Camille", were Emma's exact words. In her wake were six other riders. Racers, yes, but more in a personal battle against the mountains, the map, the mental questions of why they should push on any more.

Angus had gone so deep it was a crawl to second place. Behind him Mathieu Davy had silently gone about conquering the course, Philppa Battaye rode the whole thing with a smile, whilst the the only pairing to finish - Daniel Peat / Maurice van Roosmalenmet - were still encountering actual smugglers on the Port du Rat, proving that this race was traversing the most remote places of the Pyrenees, on foot.

The podium presentation, prize giving, and television interviews didn’t take very long. Probably because they didn’t exist. Instead there were the hugs and the smiles and the almost-tangible respect from the riders who scratched, the beers from friends. There was the BBQ and the late night party, illuminated by the mayflies putting on a performance beside the light. Mayflies have a short life, but the seemingly live it intensely. Which seems to be a fitting comparison for those that went Further.

For those who weren't 'dot-watching' during the event, you can click on the 'Replay' button on the map below and see how the each of the protagonists went Further and how Emma and Angus exchanged the lead many times. 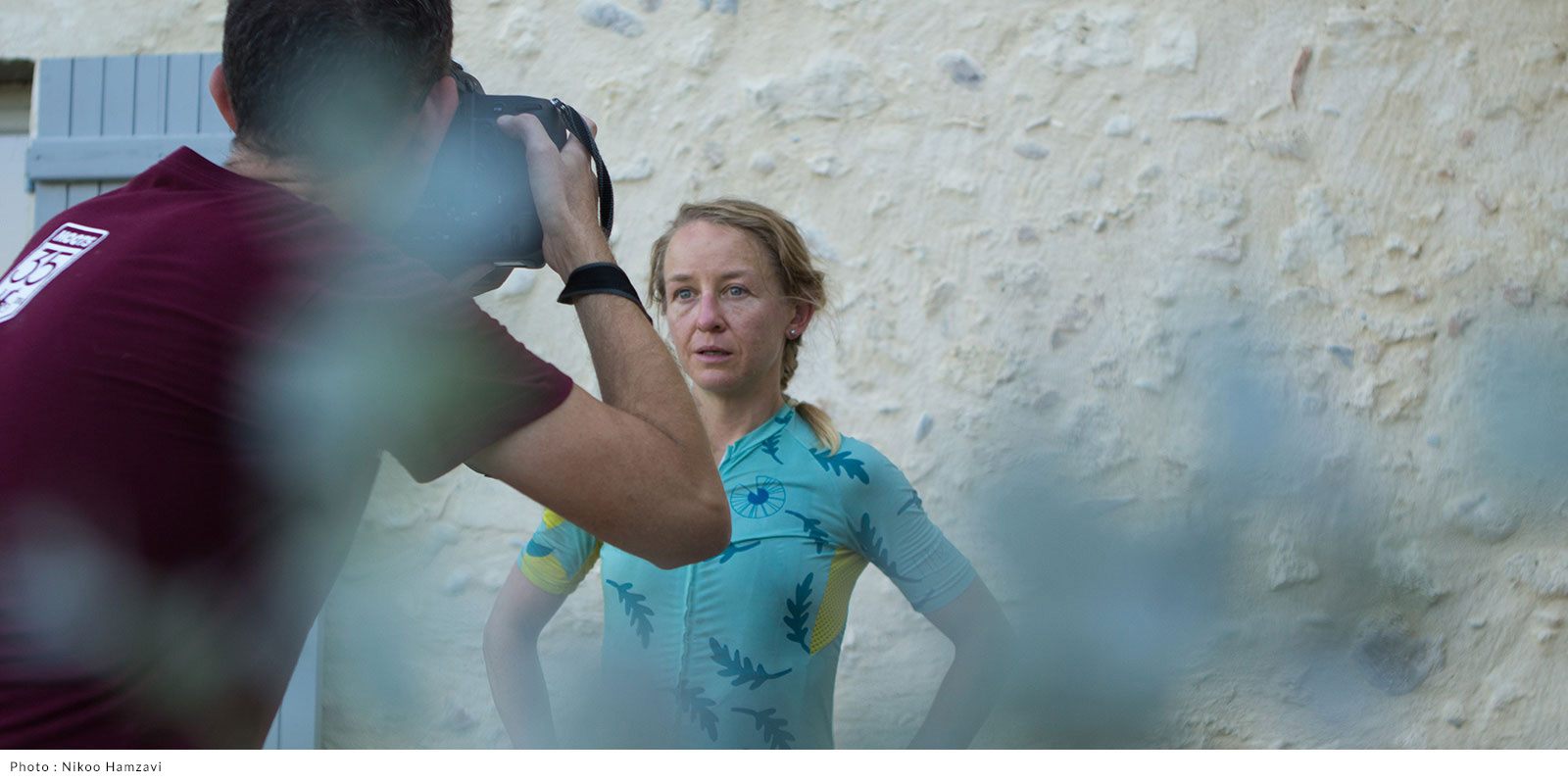