Winter on the slopes of Mont-Ventoux

On July 7th, Wout van Aert hurtled down the north face of Mont Ventoux on the descent to Malaucène and raised both arms in victory after having climbed the “Giant of Provence” twice in the same day on this gruelling stage of the Tour de France. On that day, the sun had bathed the spectators in its warmth. Thousands of cyclists had climbed the roads of Ventoux to watch the peloton pass by in those hot days of July.

Like polar opposites, on this winter morning, when we pass through Malaucène, the sun has not yet risen. So 15km higher up at the car park at Mont Serin, one of two ski resorts in Ventoux, we put on our touring skis. On a bike, ascending the Ventoux from the Malaucène side is a classic route, but the experience is a little more unique on skis. 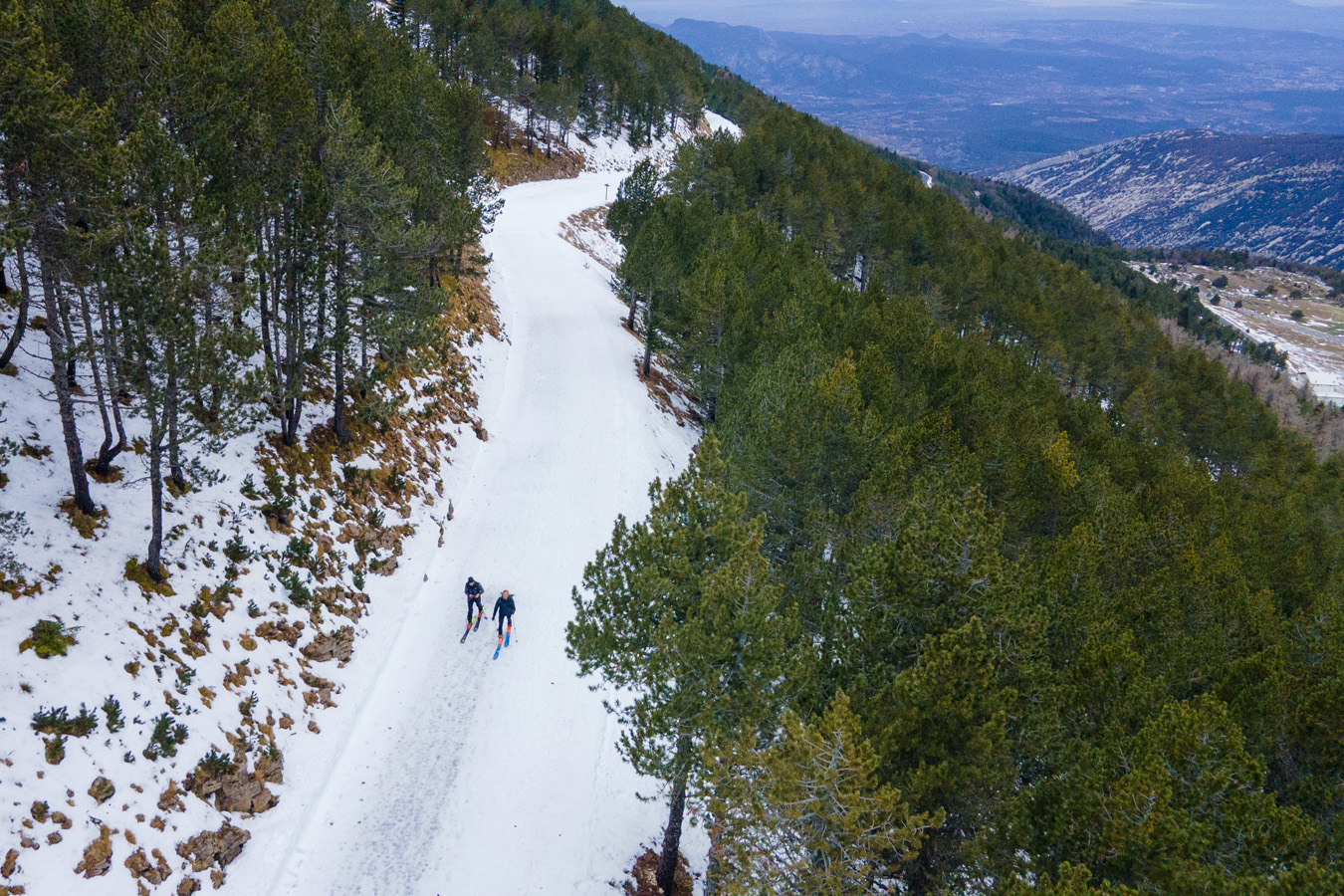 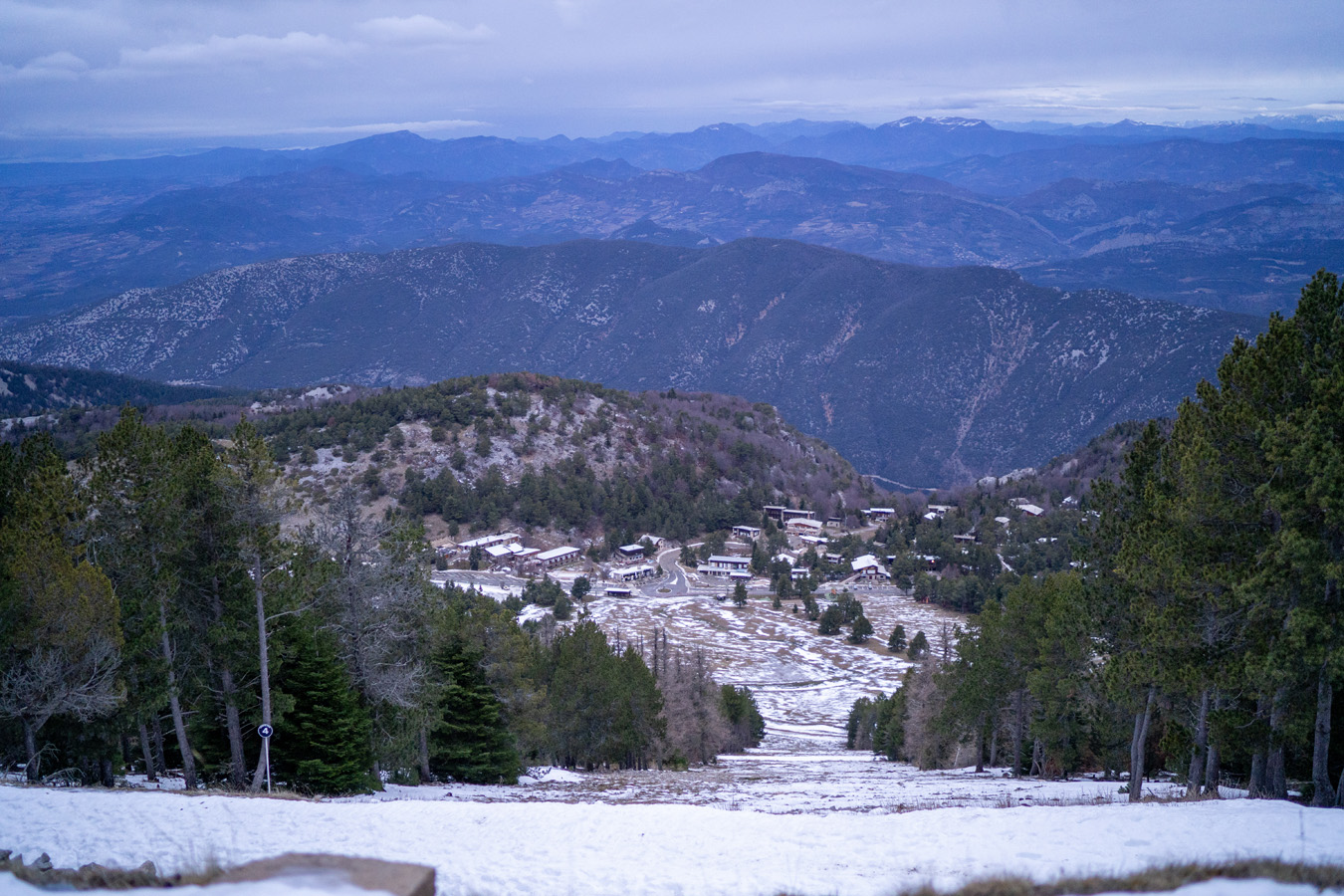 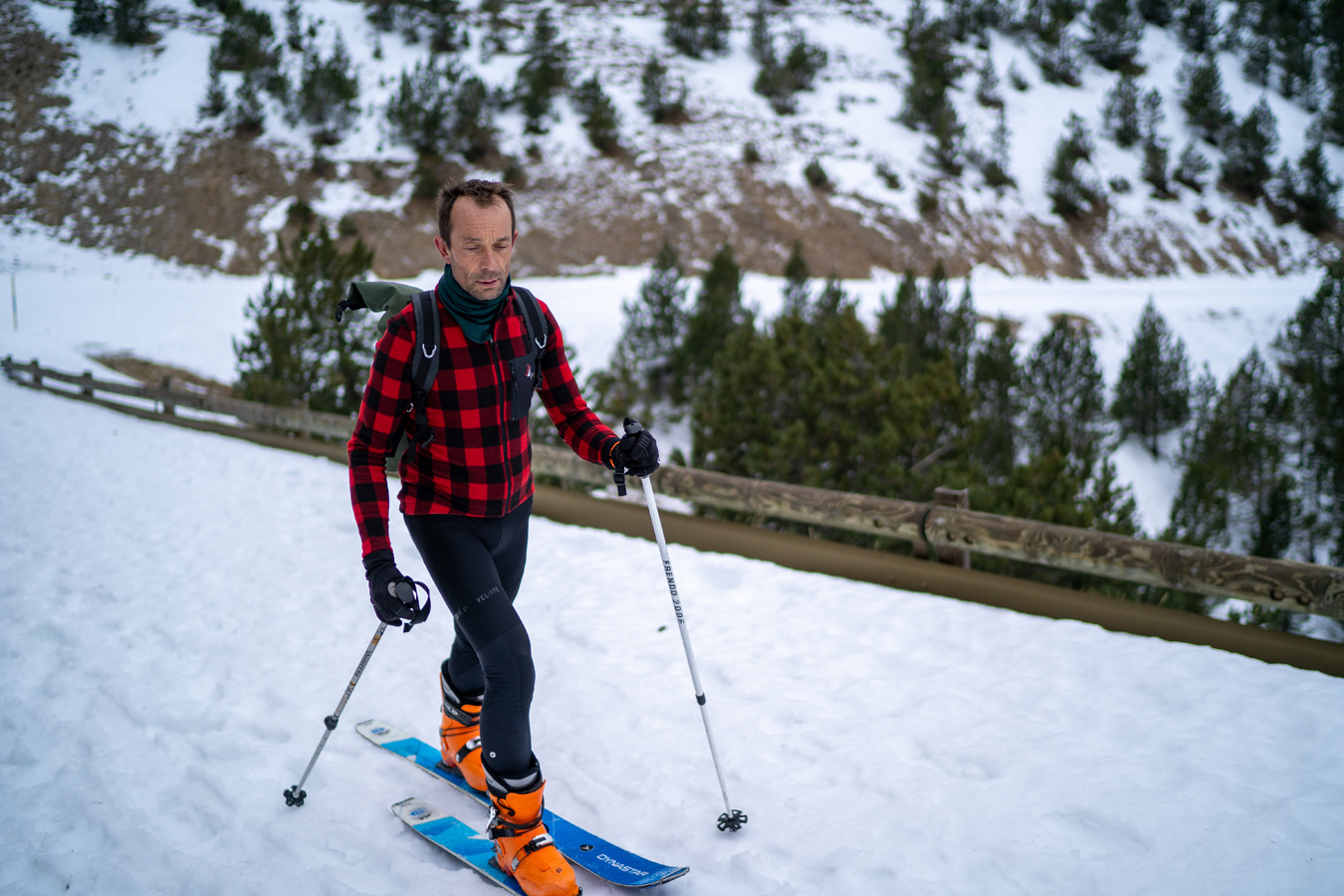 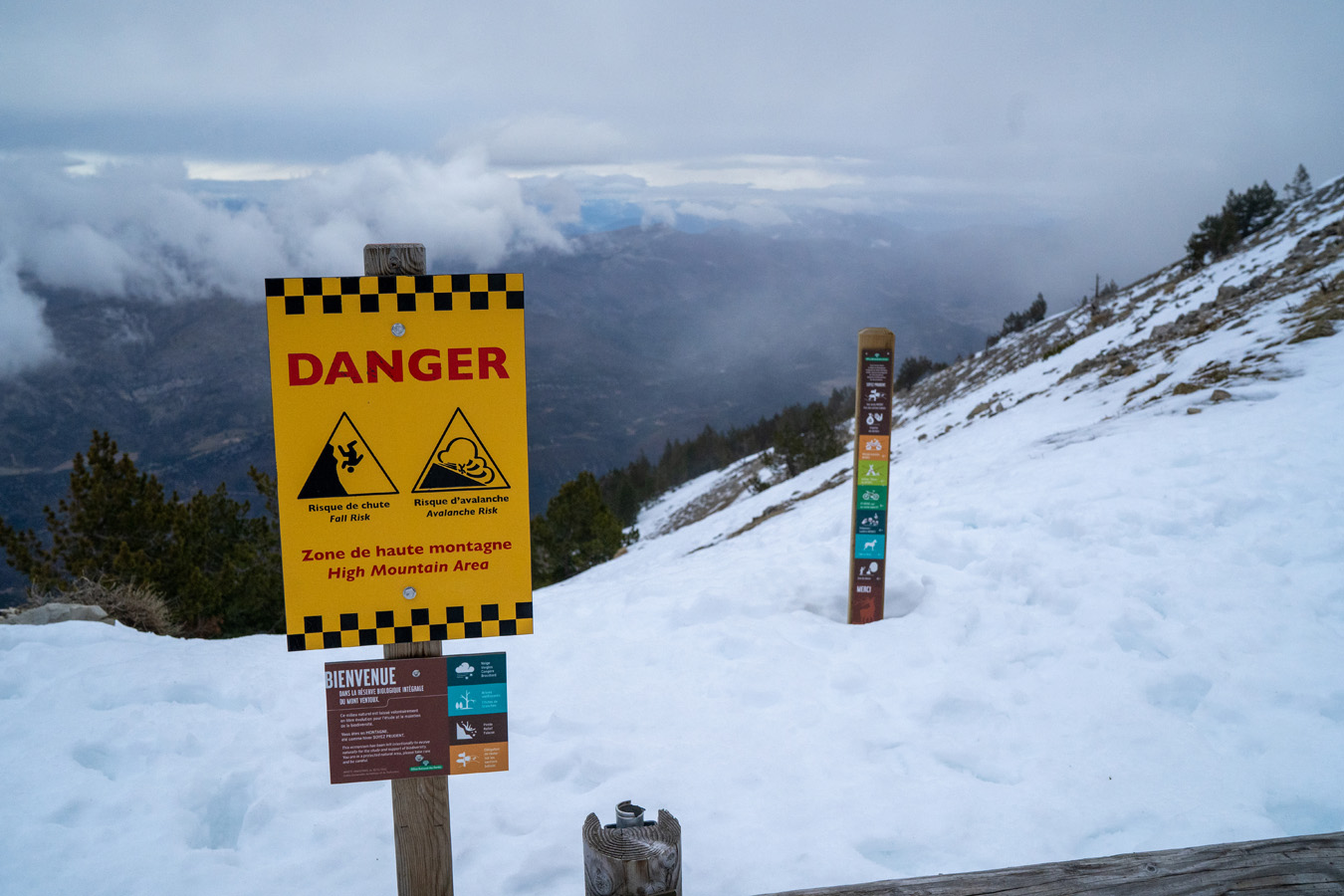 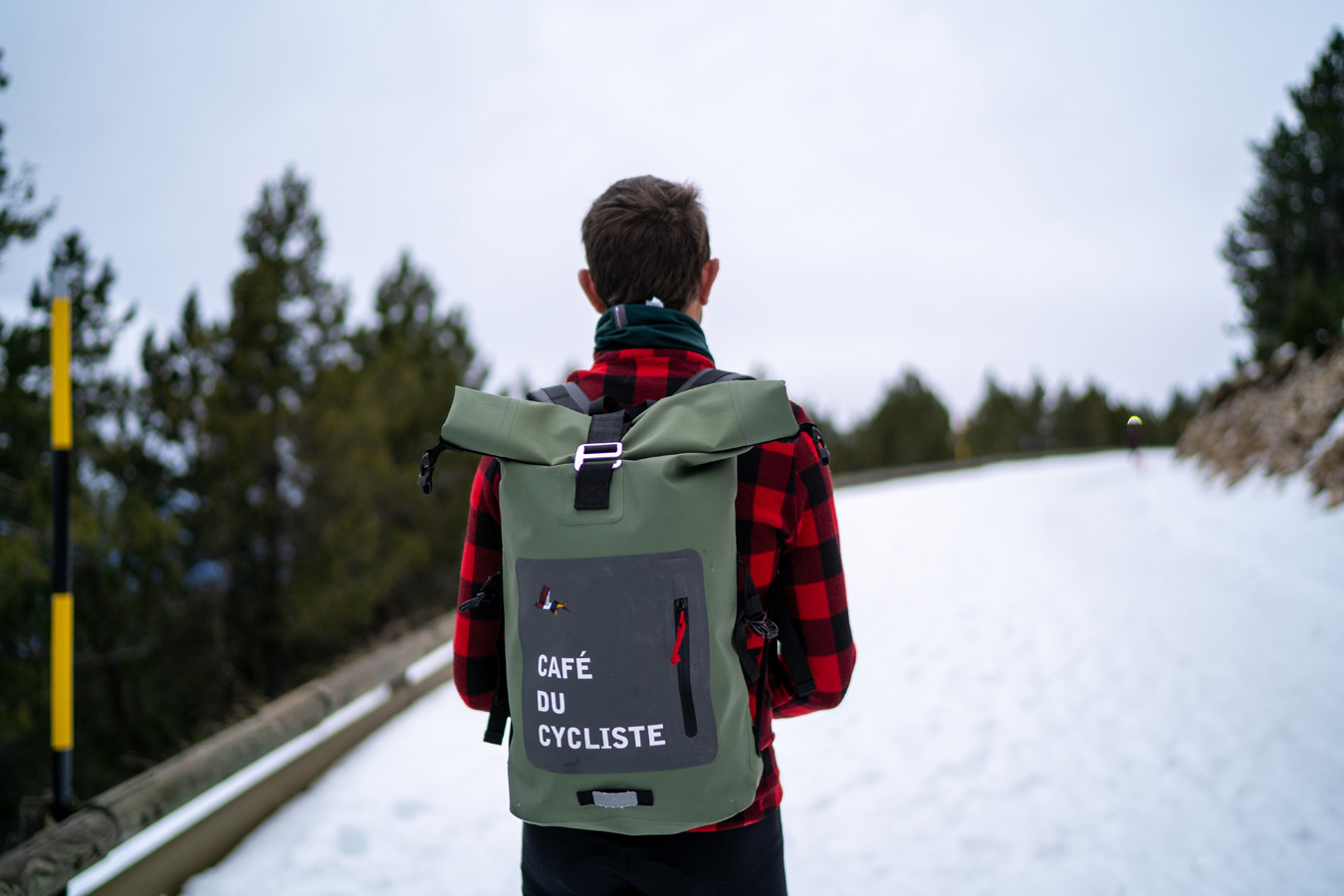 In winter, the Ventoux takes on the appearance of a high, fearsome mountain, where for six months of the year, the summit is closed to traffic. In April 2021, three months before the Tour de France caravan paid a visit, a cold snap of weather passed through France, with a temperature of -30 ° C recorded at the summit of Ventoux. In French, “venteux” means windy, and the wind whips the Giant of Provence each winter, especially with the mistral winds. On November 19th, 1967, the highest ever wind speeds of 320 km/h were recorded - more violent than a tornado. This other side of the Ventoux is much less known to cyclists, who are fanatics about the Ventoux worldwide.

In the 17th century, the inhabitants of this region were able to take advantage of this extreme climate. On the southern slope of the Ventoux, the farmers in Bédoin, equipped with picks and shovels, collected snow and ice from 1000 metres above and stored it in an ingenious snow pit. The proximity of Avignon, the “City of Popes”, generated a strong demand for a commodity difficult to make back then, ice. In the South of France, around the Meditteranean, meat and fish were neither salted nor smoked, and ice was the only way to preserve them. Eating fresh food and drinking cold drinks is the prerogative of the upper classes. Ice also has healing qualities. It can help stop bleeding, alleviate pain and stomach aches. 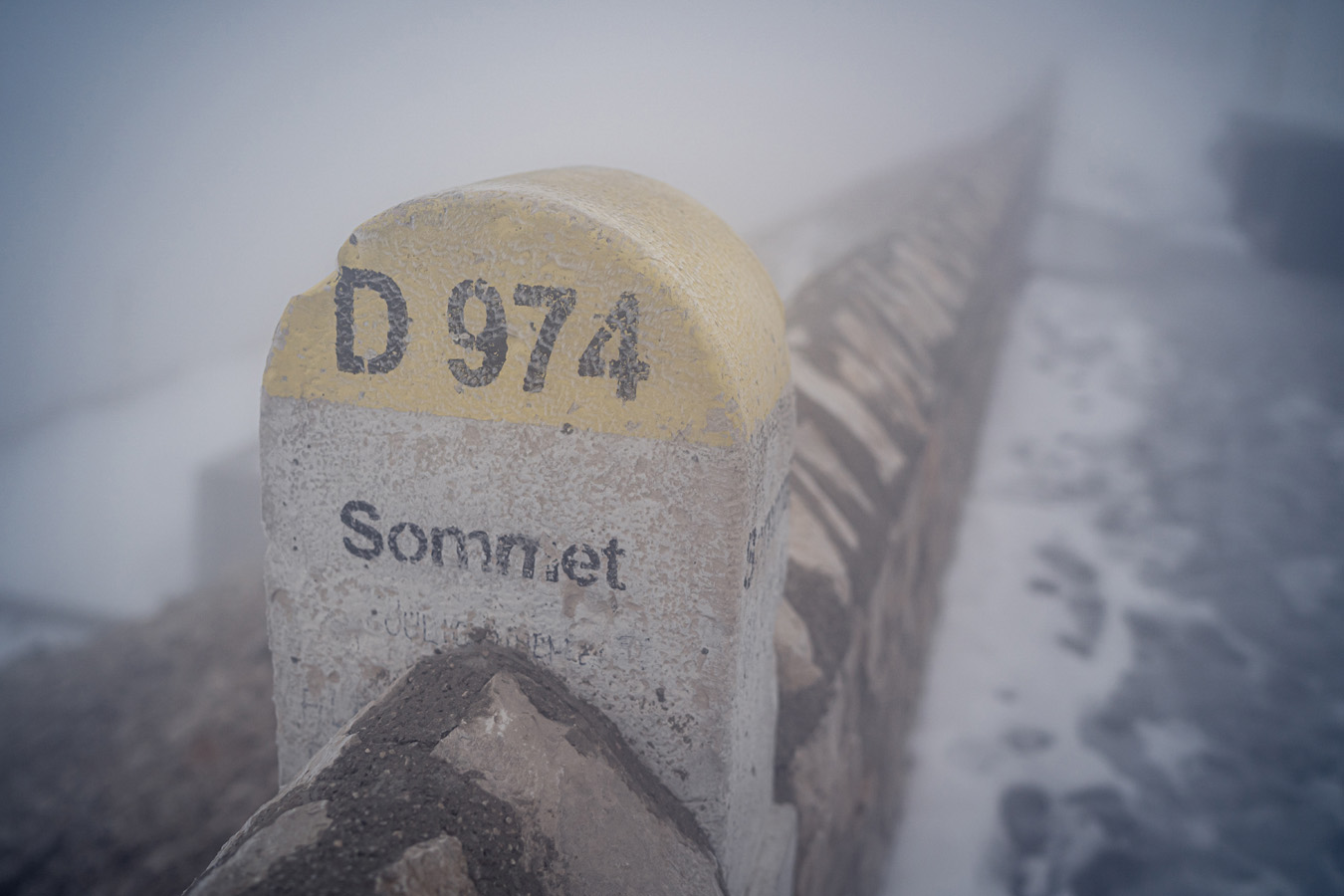 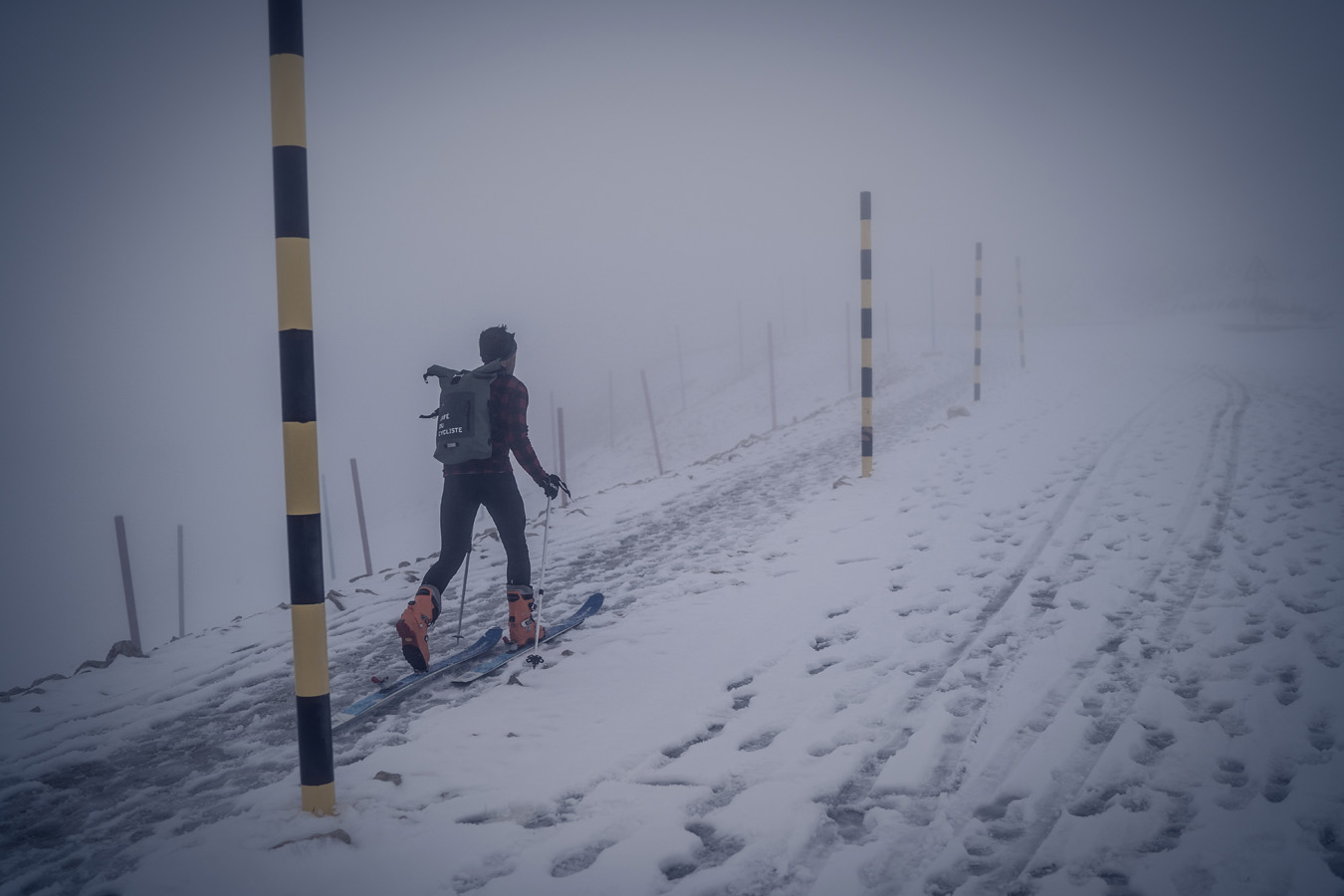 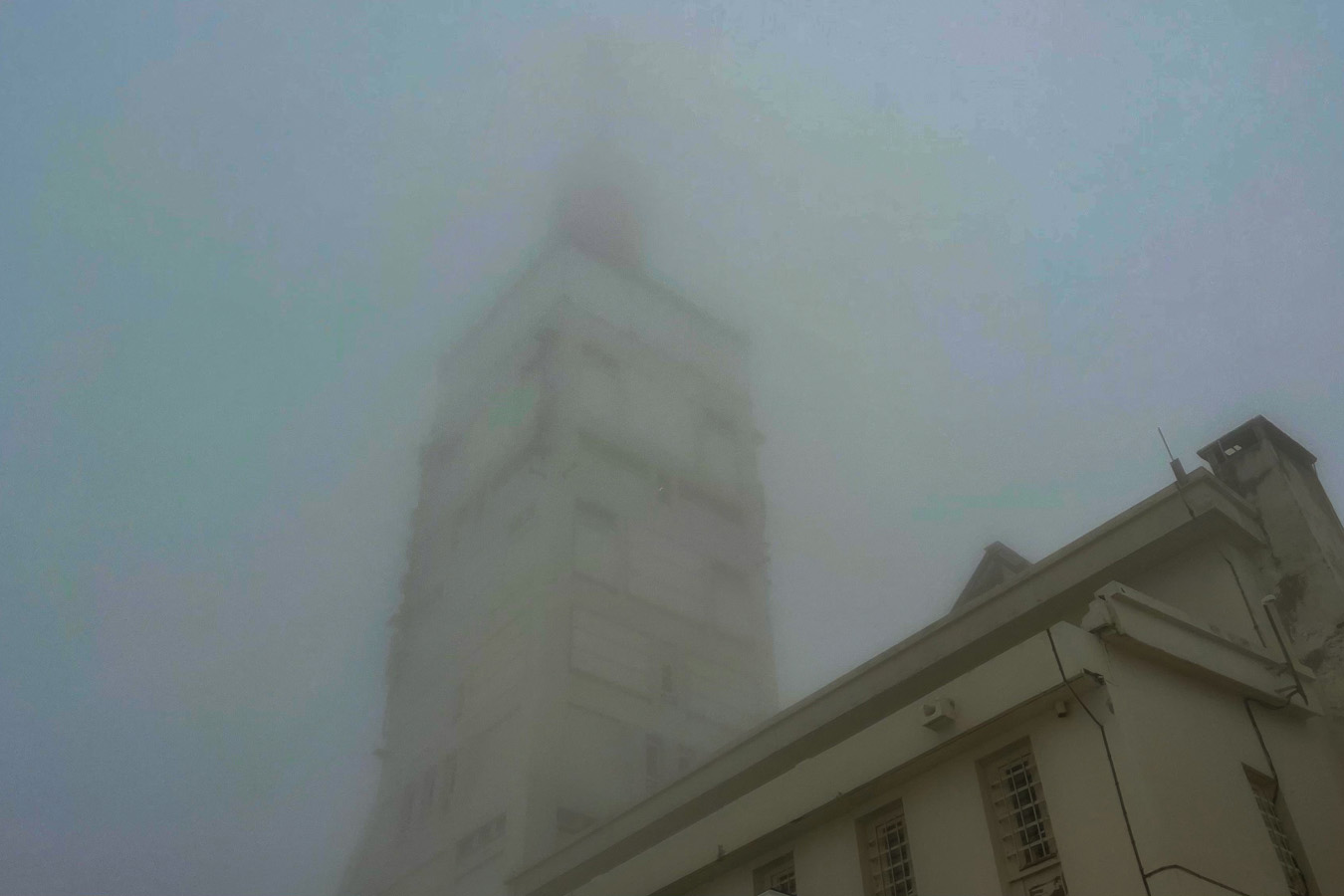 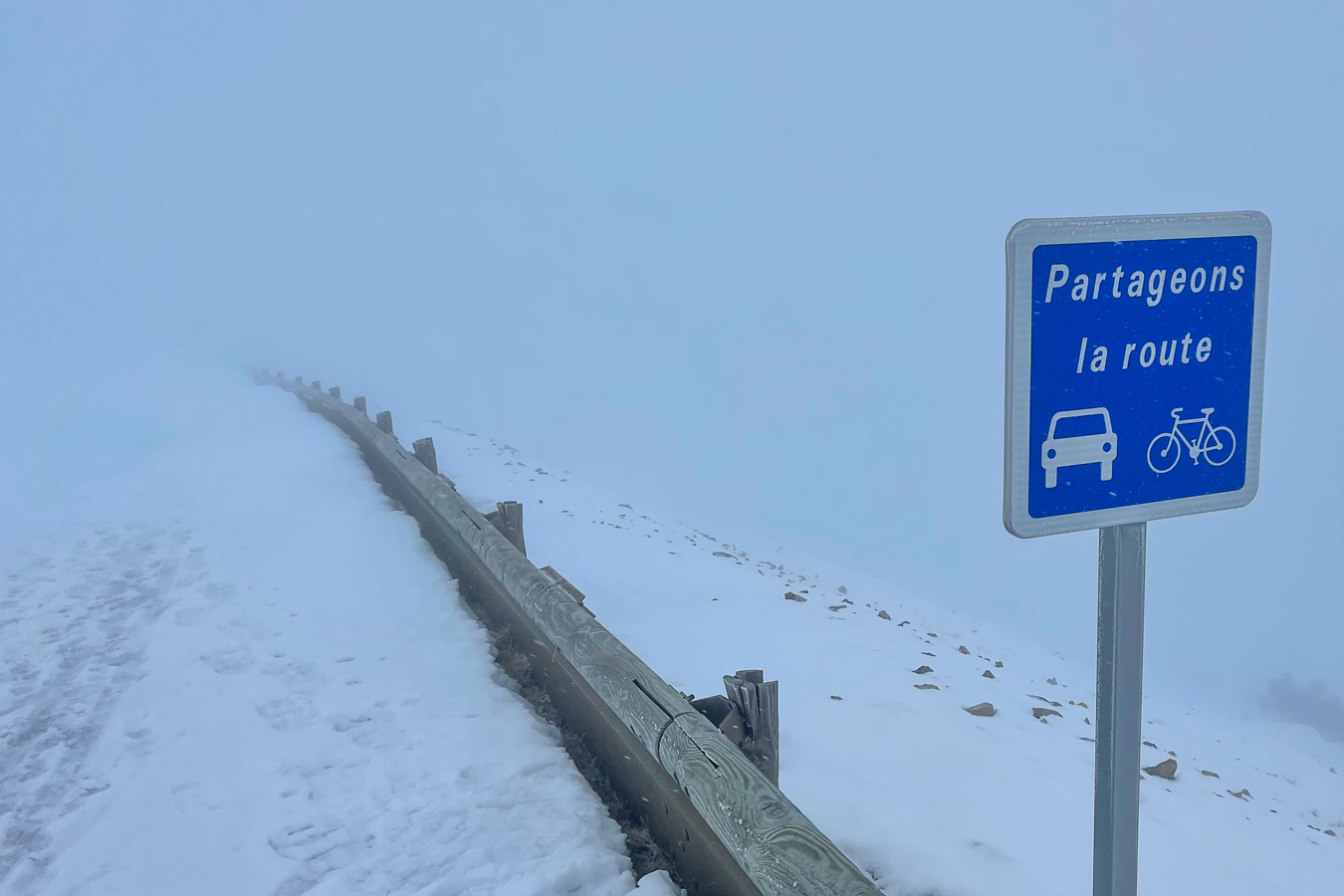 In Avignon, at the Palace des Papes, under its imposing vaults, were coolers to ensure the preservation of this precious commodity. All of the surrounding towns, Carpentras, Orange, Nîmes and Montpellier etc., benefited from the supply of ice from Ventoux. The Ventoux ice was transported on the back of mules; however, the ice could lose as much as 50% of its volume during the journey. It was not until much later that the railways arrived to make this trade more accessible to everyone. However, with the advent of refrigerators at the beginning of the 20th century, the business of Ventoux ice became obsolete.

From the Bédoin side, much like from Malaucène, those cyclists who have successfully reached the summit of Ventoux know how rocky the slopes are on the barren, lunar landscape towards the top. While traversing the snow-covered road with skis, we come across ski lifts and marked trails. The very idea of creating two ski resorts here seems absurd, to say the very least. Those ski slopes away from the tarmac roads require thick snow cover and exceptional conditions to slide with skis. This doesn’t spoil our pleasure though. 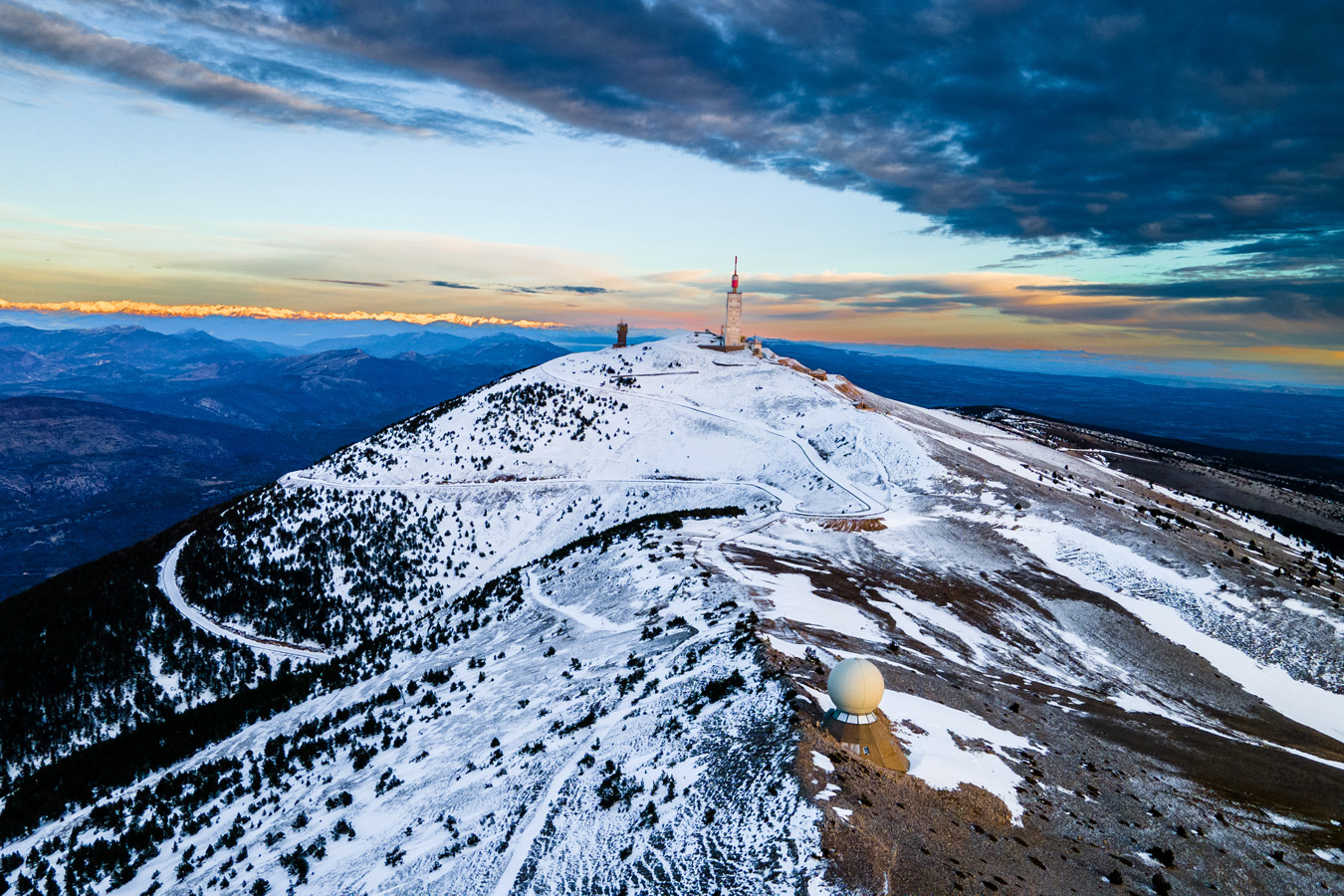 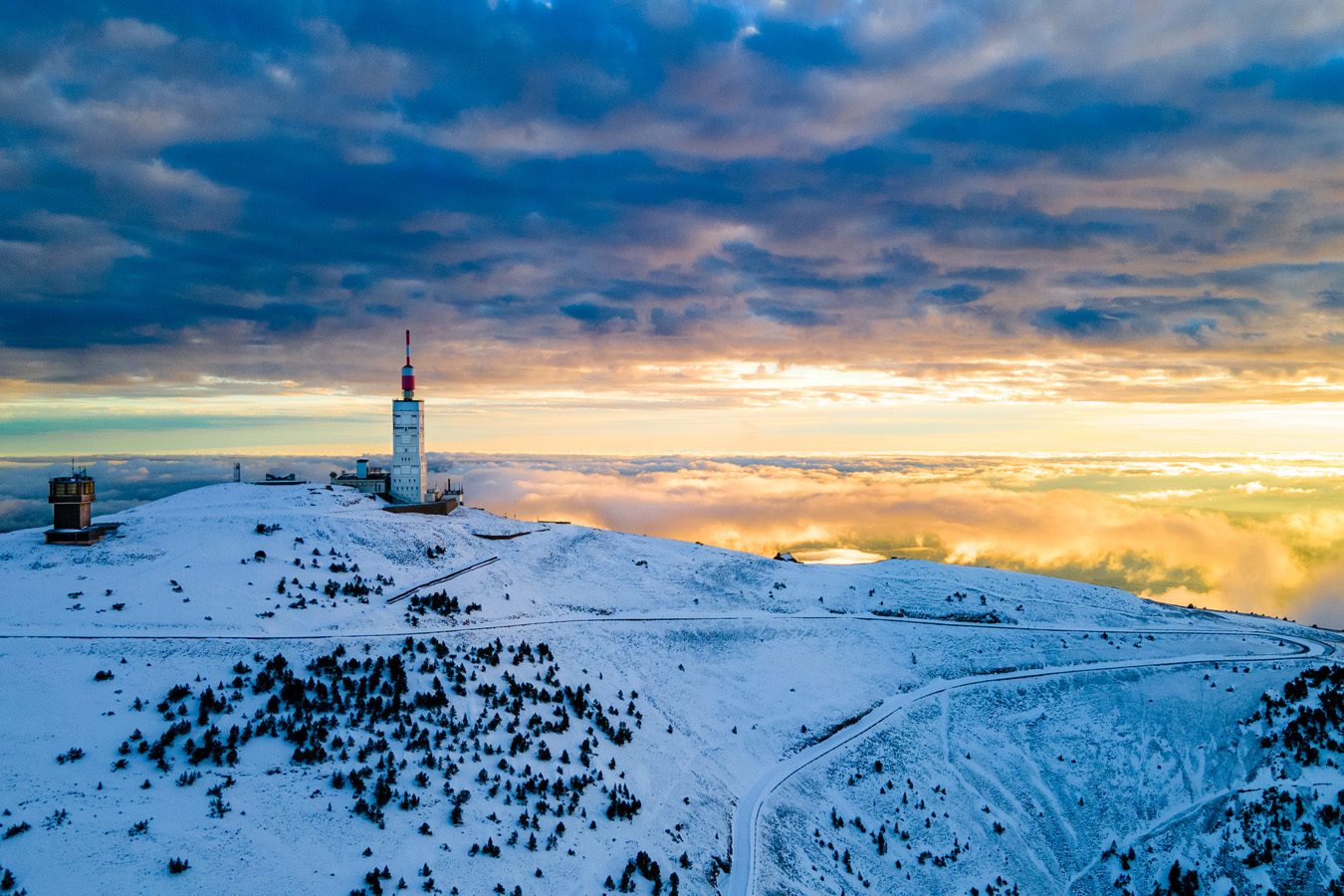 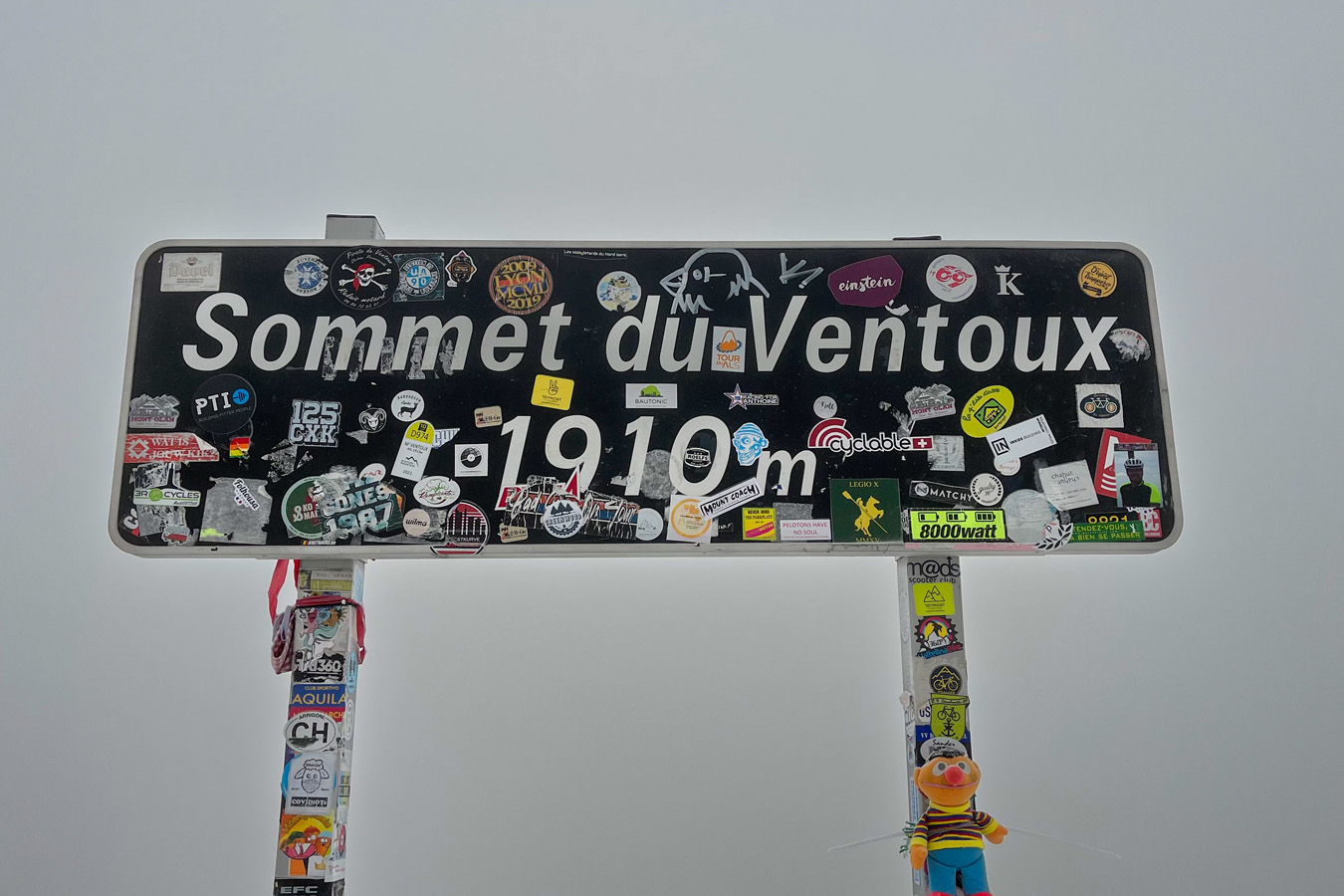 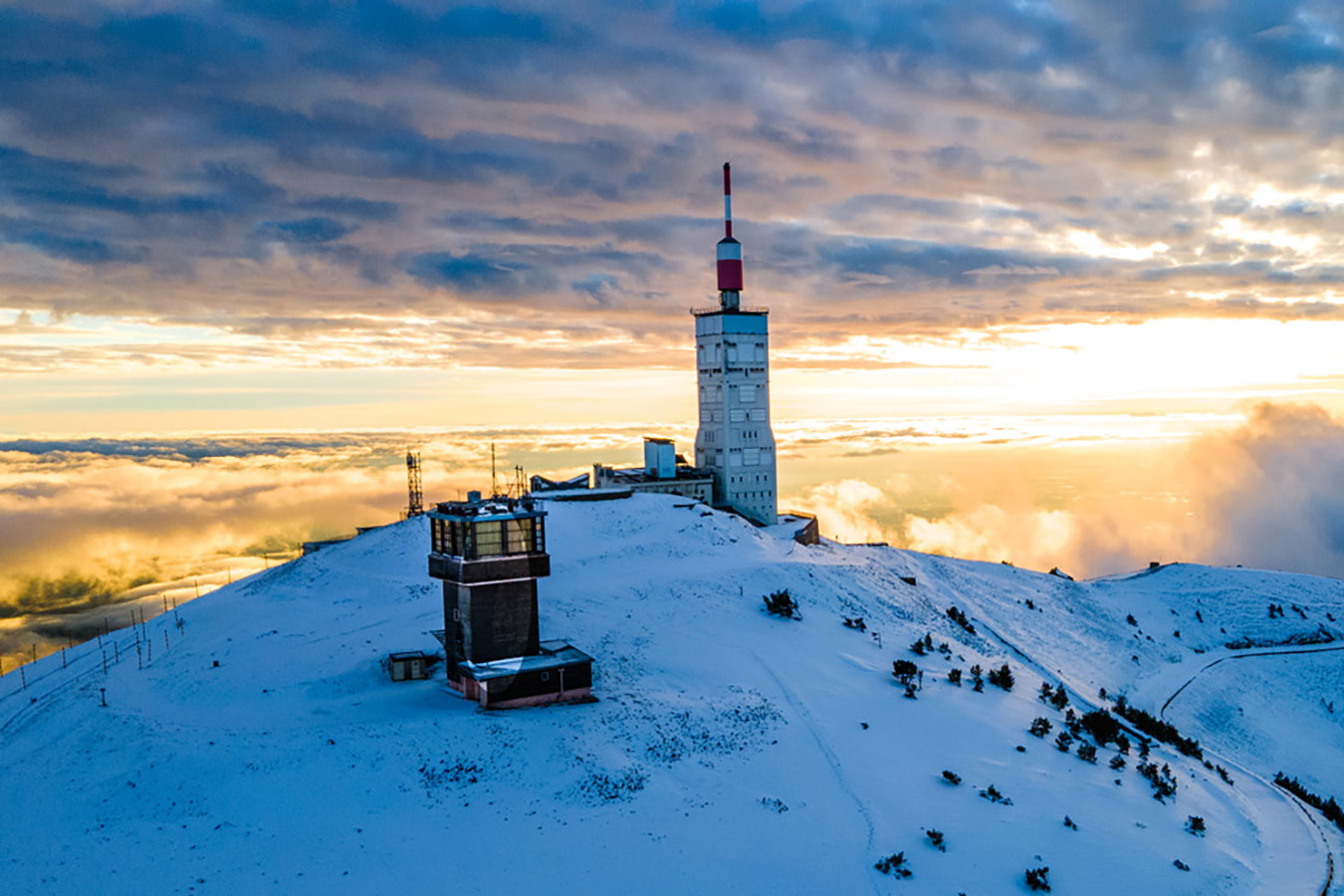 When we successfully arrive at the summit, the temperature is -1 ° C, but it’s still early in the day, and a few snowflakes are swirling around in the sky as it starts to snow. The famous red and white posts are impossible to distinguish as the mist is thick. It’s deserted at the summit, and there’s no one to compete with us for the glorious selfie under the famous Mont Ventoux sign.

The cold stings our fingers as we tighten our ski shoes and start the 6km descent. However, our skis quickly pick up a reasonable speed, which surprises us slightly. The Ventoux is seriously steep, so it’s with good reason that the ascent has always demanded a special effort.

In five months, the snow will be gone; the sun will warm up the forest, and nature will emerge from its hibernation. The Ventoux will transform into its summer version, and its routes will re-open to the public. The bikes will resume their everlasting ballet in this great universe, and cyclists can again measure themselves against the Giant and especially against themselves. 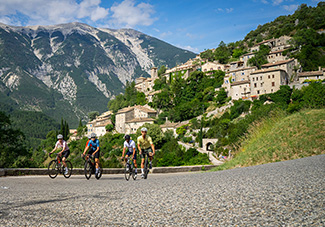 When the organisers announced that the Ventoux would be climbed twice in the Tour de France 2021 edition, it was certain that July 7th was going to be a historic day. 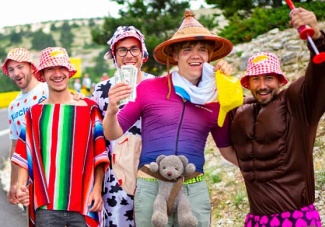 Scenes from the road side of the Mont Ventoux on Stage 11 of the Tour de France 2021. 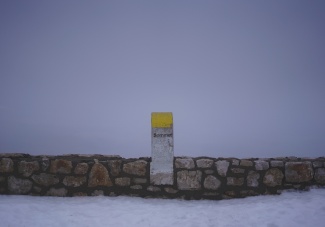 Climbing the infamous 'Bald Mountian' is tough in the best conditions. Sprinkle some snow and add some cold and the challenge becomes even more extreme.

There is always a way to escape the madding crowds, in this case it's gravel. Finding fun on Mont Ventoux's G-Side.