Zinzin : Qui est bizarre, un peu fou // Someone who is peculiar or strange, a bit crazy…

The Brevet des Zinzins is a challenge of three : climbing each side of the Col de Turini in one day. The second edition of the Fête des Zinzins, a group attack on the Brevet, was the story of another trilogy. A trio of crashes... 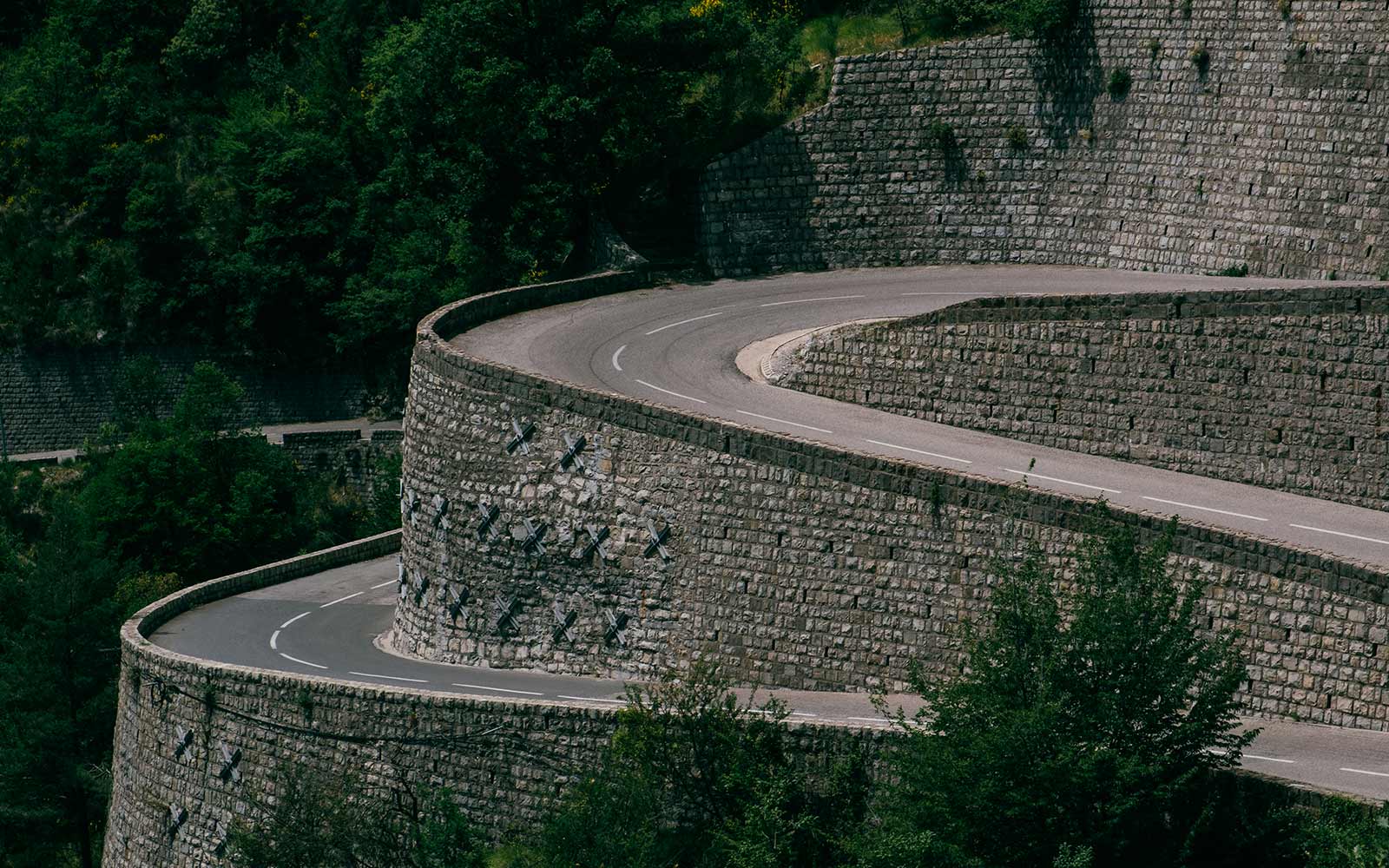 Laura Barralis is in only her second year of riding and she is in the process of falling down the bicycling rabbit hole. Misfortune came for Laura on the day before the Fête des Zinzins. An incident on the Promenade des Anglais cycle path with a young girl on a bike meant she took a trip over the bars. The result was road rash from chin to toe and bumps and bruises down her left side. In other words, not enough to dampen her motivation to complete her biggest ride to date. 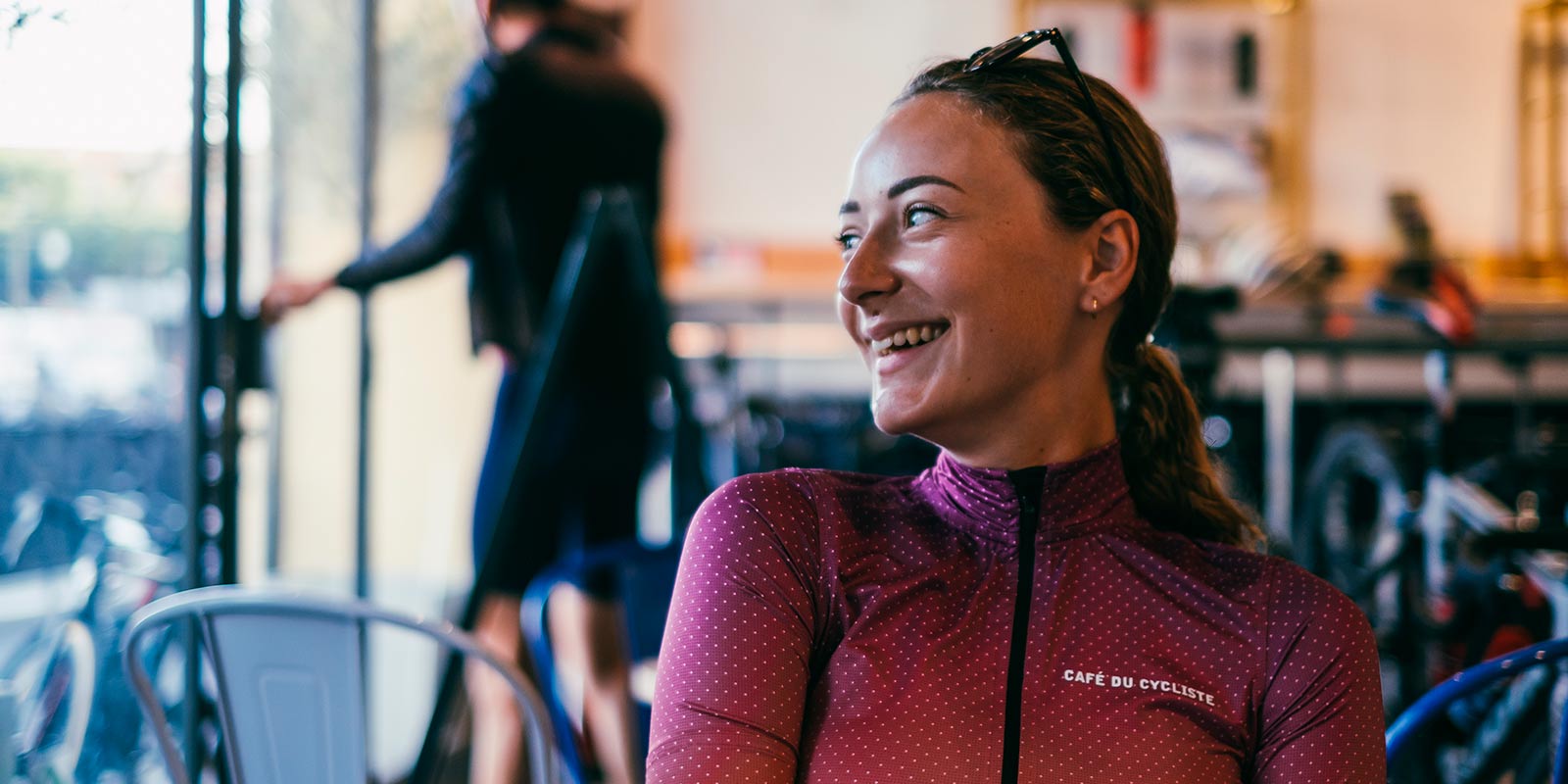 Chris Grulich is a Parisian-born, Louisiana-bred, Niçois-based young gun who, like Laura, is in the throes of a new obsession. Before arriving in Nice, he was an IT student, a fashion model and a bike messenger in Paris (another altogether different but nonetheless notable trio…). He’s been savoring all the Alpes-Maritimes has to offer, and just one week before completed the Mercantour GranFondo which delivers up 190kms and 4,600m of elevation and tops out on the Col de la Bonette. Zinzins should therefore have been relatively easy. Until gravel came up and bit him on the descent to Sospel after the first climb of the day. 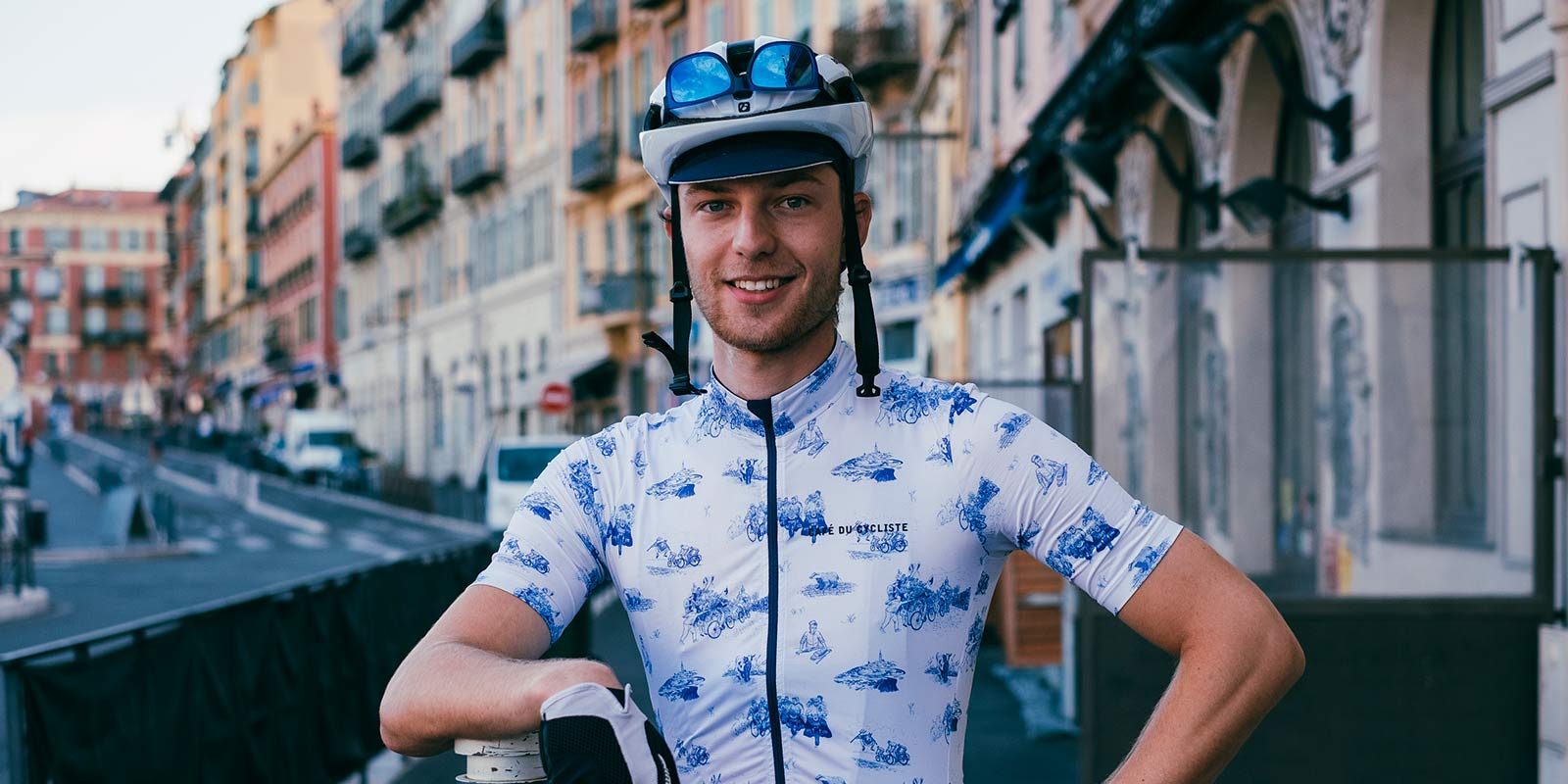 James Hayden is one of the biggest names in long distance, ultra endurance cycling. His mantra is ‘pushing limits’. The Fête des Zinzins was scheduled as the perfect mid-season ‘training’ ride for him as part of his build-up to the Silk Road Mountain Race. Unfortunately, three weeks before his date with Turini, he attacked a river crossing during the Highland Trail 550 and his front wheel met its limit against some rocks. Flying over the bars, he banged his right knee in the process. 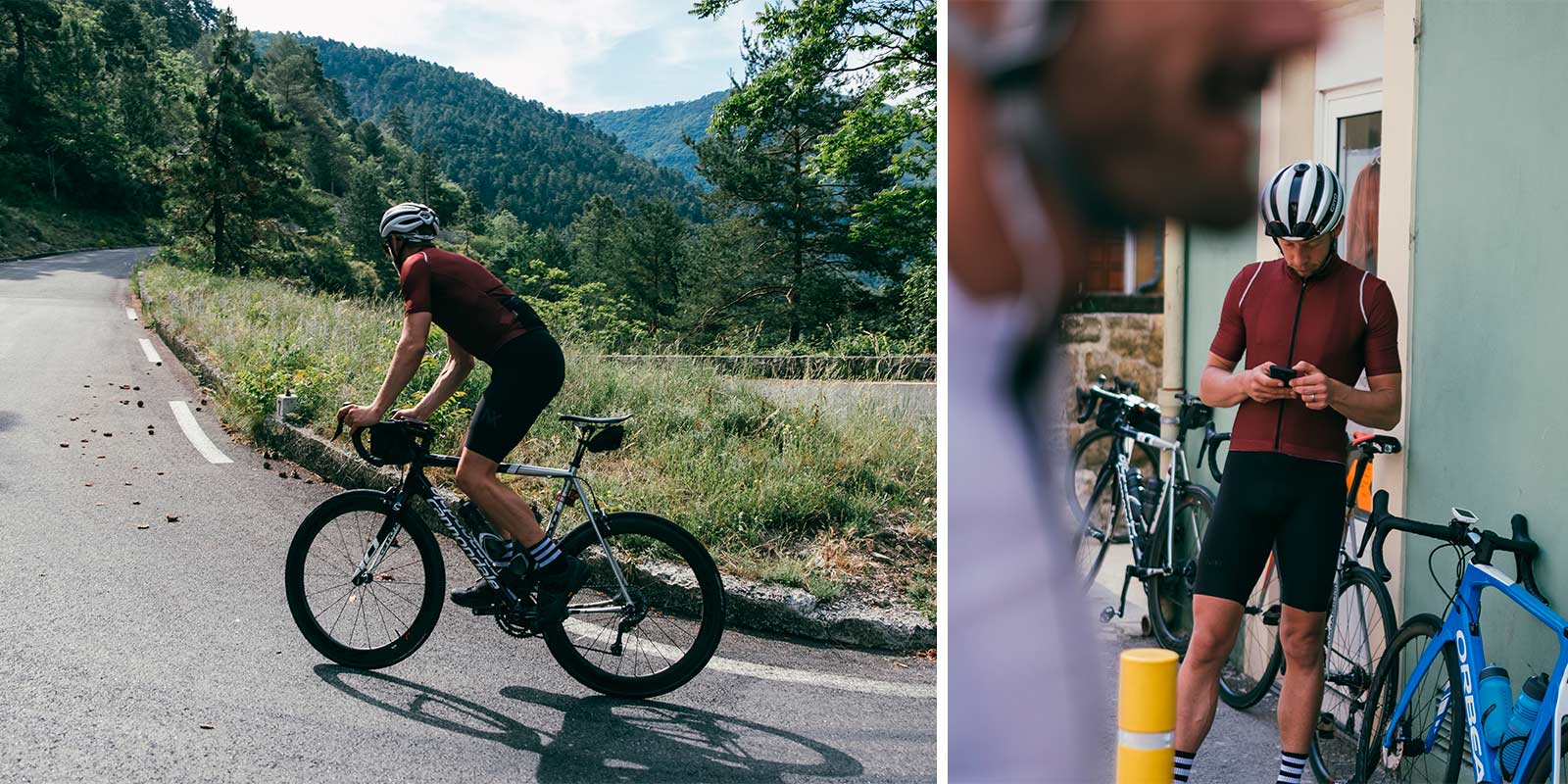 As a result of his crash, James sustained a knee injury that at the time wasn’t thought to be serious but such is his ability to endure and the extremity of his competition, post-event diagnosis revealed more damage than originally suspected. Not one to avoid a challenge he lined up with the 20-odd other Zinzins at the Café to attack the Brevet on the longest day of the year. We’d secretly hoped for a record time for the L’Escarène, Sospel, Bollène-Vésubie parcours. However as the 27kms of the first ascent through Lucéram and Peïra-Cava ticked by it became obvious today was not the day. Instead James would watch others test their long-distance metal from the support car. 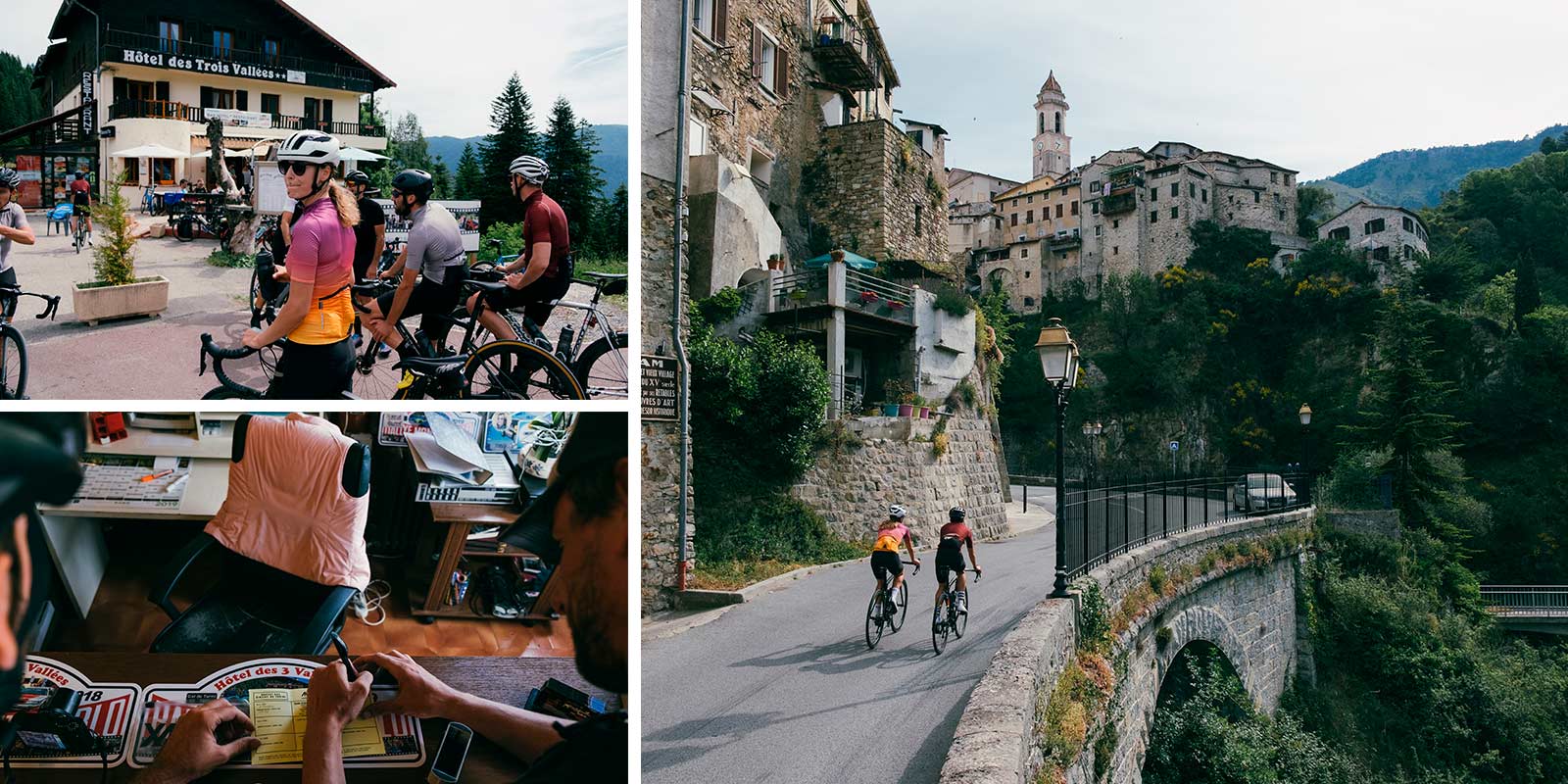 Laura might be new to the game, but she has acquired experience quickly. She seeks to save energy as much as possible on the first climb and is not fooled into following faster wheels. Talking with her about her biking activities thus far it’s clear she’s serious about her adventures. Two weeks previously she climbed two sides of Ventoux from Bédoin and Malaucène with her parents and friends. Last summer she did Les Trois Cols – Cayolle, Allos and Col des Champs, each of them topping out above 2,000m – also with her parents. Evidently, it’s in the genes. But for Laura part of the fun is in the companionship and feeding off the energy of others. On the second time up from Sospel the objective was to stay with a group. That she did until the final 5km in the forest where the gradient simply does not let up and she lost the wheel in front. After that, the rhythm and power in her legs began to evaporate. But she’s a psychiatric nurse so presumably, or should we say – evidently, she knows how to play the mental game when the going gets tough. 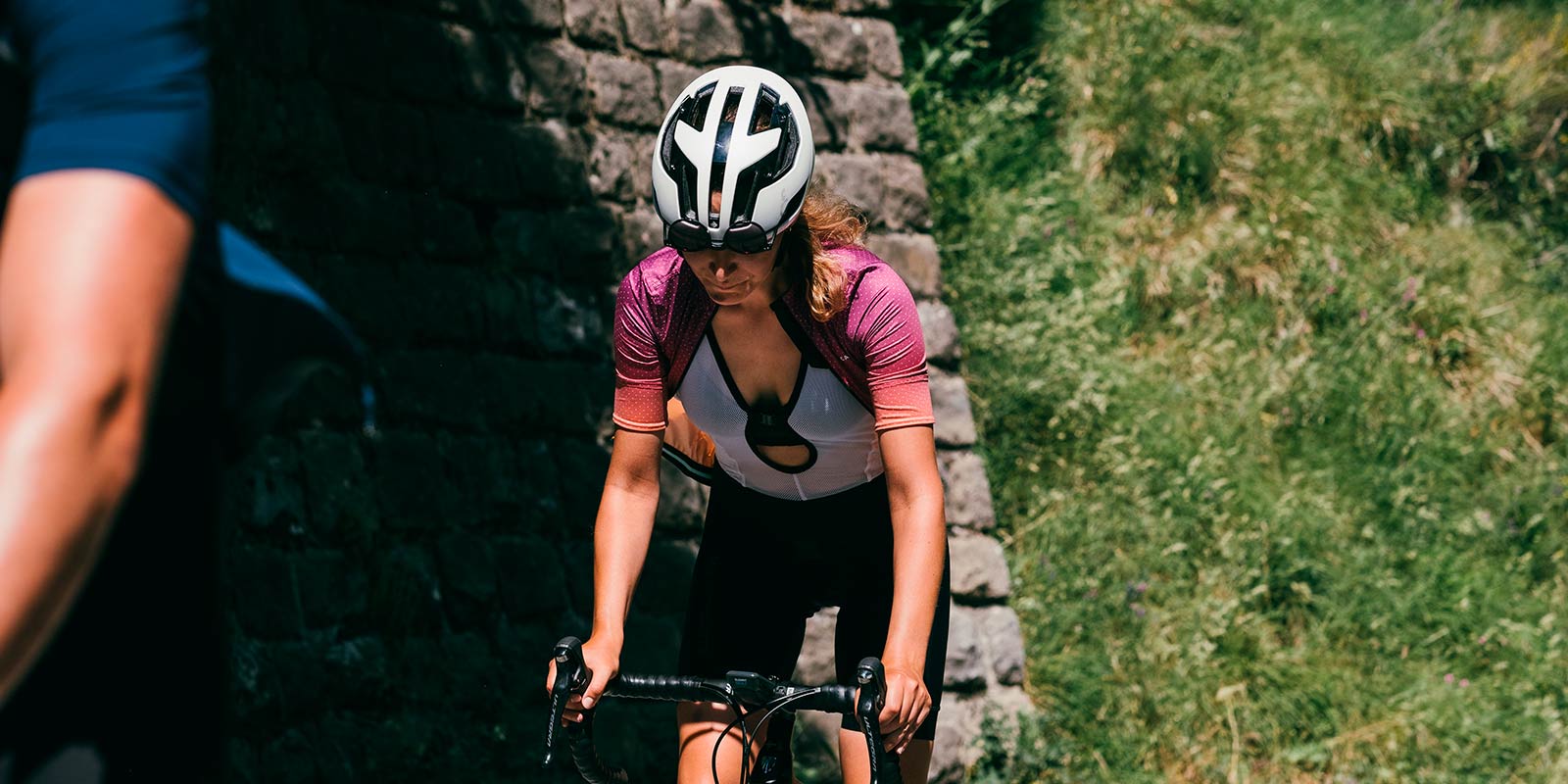 Meanwhile Chris was in a different battle. He’d flown up the first climb, meeting and riding with Ivan, a local rider who successfully completed the first edition of the Fête des Zinzins last year. Full of endorphins, adrenalin and youthful enthusiasm after obtaining the first stamp in the Hotel des Trois Valées on the Col, they pointed their noses downwards. Just 4km into the descent, roadworks led to an unusual amount of gravel on the road and before he knew it Chris was on the deck. His fashion sensibilities from his time in Paris and a certain element of sentimentality had led to his choice of blue tone Café du Cycliste kit. The Toile de Jouy design of Valentine reminded him of the same style he’d seen in his grand-mother’s bedroom back in New Orleans. Unfortunately, his cycling jersey and Marinette bib shorts were now more aerated than originally intended. However, it could have been a lot worse. Chris had set out with one objective today and he was going to finish it, blood or no blood. A true Zinzin.

The other Zinzins had already verified their arrival at Sospel and were quietly going about their business on the second ascent. Pierre comes up with crazy rides across the Alpes-Maritimes and beyond every weekend, so this is just one more to add to his yearly Strava statistics. Somewhat frustratingly, he makes it look easy alongside Nico, another two-time Zinzin. Just like Matthieu, our Audax man from Marseille. He taps out a rhythm with amazing souplesse alongside his partner in crime and long-distance newcomer, Simon. Others like Thierry and Valentin are returning to complete unfinished business from last year with a steadier rhythm and riding and chatting with others like Laura to help make each 100m of elevation gain that bit easier. 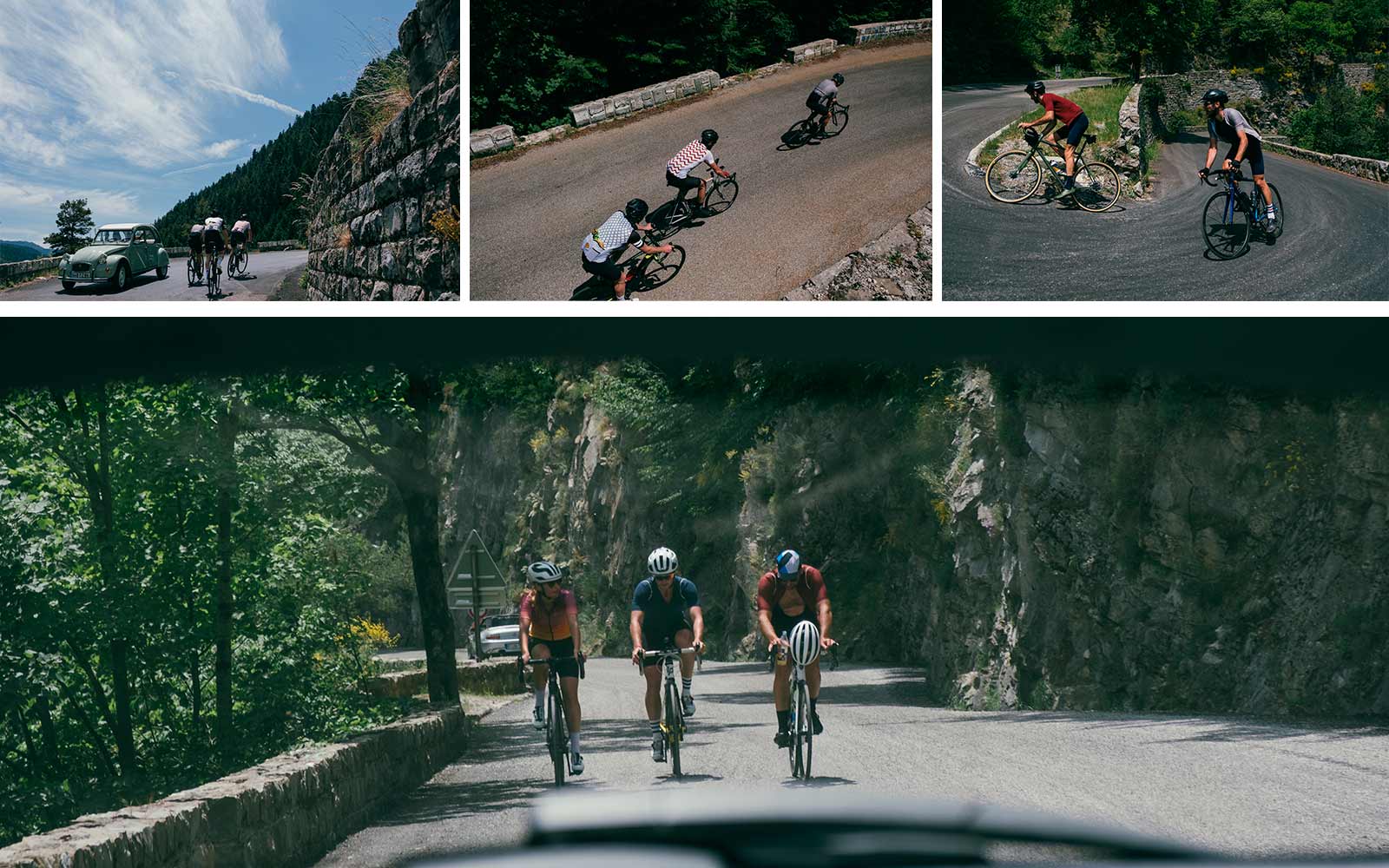 It’s acknowledged by almost all Zinzins that the second climb from Sospel is the hardest so the food and cold Oranginas waiting at the top (after Brevet cards are stamped, of course) are more than welcome. The Zinzin community spirit is strong and questions and discussions are mostly of concern for Chris who, having been patched up by the first aid kit from behind the Brasserie’s comptoir in Sospel, is somewhere down below. Tackling the toughest side, nursing a badly gashed elbow and a fair amount of road rash, in the midday heat must have been… an experience. But it’s a free world and an open brevet. So those at the front remount and head down to the third and final base town.

On the bounce at Bollène-Vèsubie apparently not one café or brasserie is open to stamp brevet cards. Matthieu shows his long-distance experience and somehow enters the Marie (the town hall) to make him and Simon the only ones with a 100% stamp rate. Laura finds her rhythm with Valentin. They shoot the breeze and turn the pedals. Others crank up the pace and there are duos and trios of riders scattered up and down the climb like ants.

Two-thirds of the way up the climb a blue and white flash comes down the hill. It’s Chris, followed by his partner for the day, Ivan. Some might have been disheartened to see the rest of the group at near completion of the route. Not Chris, he had nothing but energy and excitement to complete the third side. 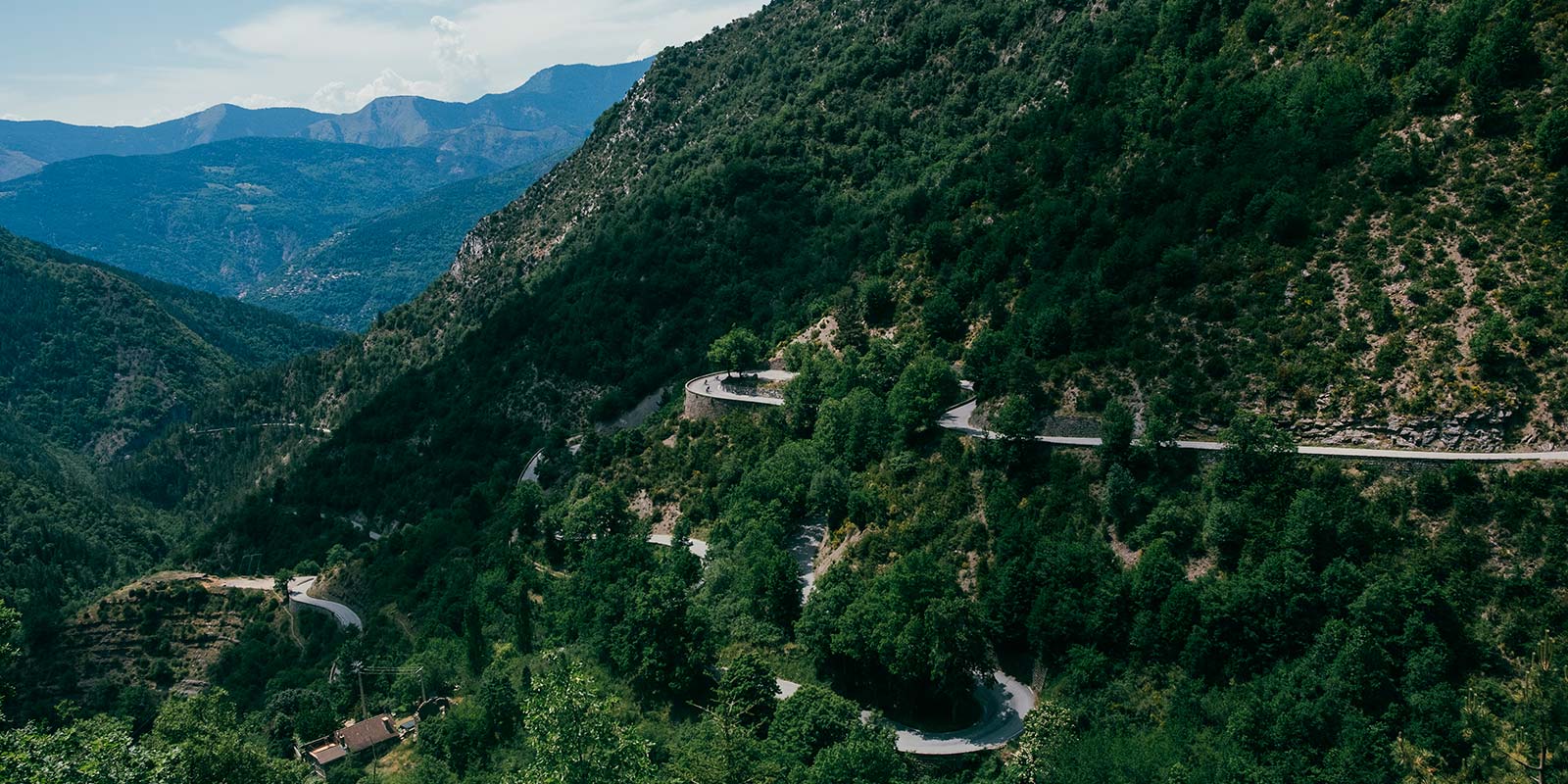 Laura makes it to the top and shares hugs and high-fives with the rest of the riders beside the fountain. Finally, after all those hours of suffering she shows the first signs of the effort - she is shaking, hopefully from excitement but presumably also with fatigue. But her smile is from ear to ear and she is ‘très contente’. Julien is first to the top to avenge last year’s two-side effort. The salty sweat stains make his all black jersey Zebra-esque. It was impressive watching his effort and will to make it to the Col for a third and final time. 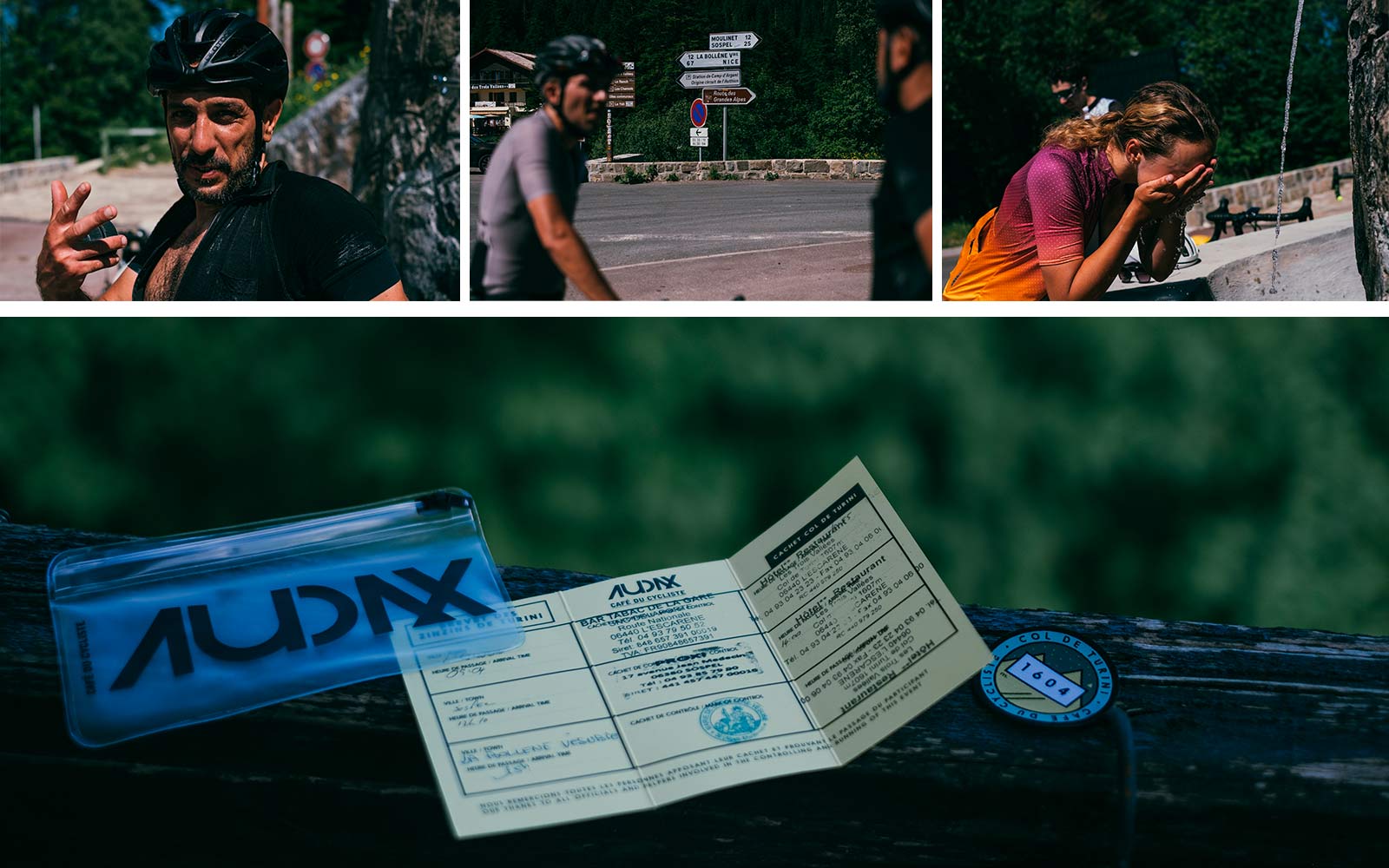 Whilst Brevet cards are now full (at least, Simon and Matthieu’s are) the job is not done. In keeping with the Zinzin spirit, there is of course the 50km return to Nice still left on the agenda. The group roll back down to the Café together for a well-earned pizza party. The Café porter bike has never carried such a brilliant delivery. Stories from the day are shared and the newer challenges are discussed over beers, because for Zinzins it’s all about the next big thing. Laura wants to ride both sides of the Col de la Bonette in one day. Then someone mentions the 7 Majeurs. The sky is literally the limit for some.

And then, the sound of freewheels stops the conversation. Chris and Ivan arrive to break up the party. The group erupts into a round of applause. People want to hug Chris, but because of his injuries they can’t. He recounts getting stung by a wasp right on his road-rashed shoulder on the third ascent. He considers going to hospital but takes a beer instead. It’s a La Chouffe – 8%, a bit like certain parts of the Turini’s slopes, and therefore hopefully with the desired anesthetic effects. The group is complete again and mention is made of next year’s Fête. It’s three weeks before the Tour de France will scale Turini. We wonder if some of the peloton might want to join us. 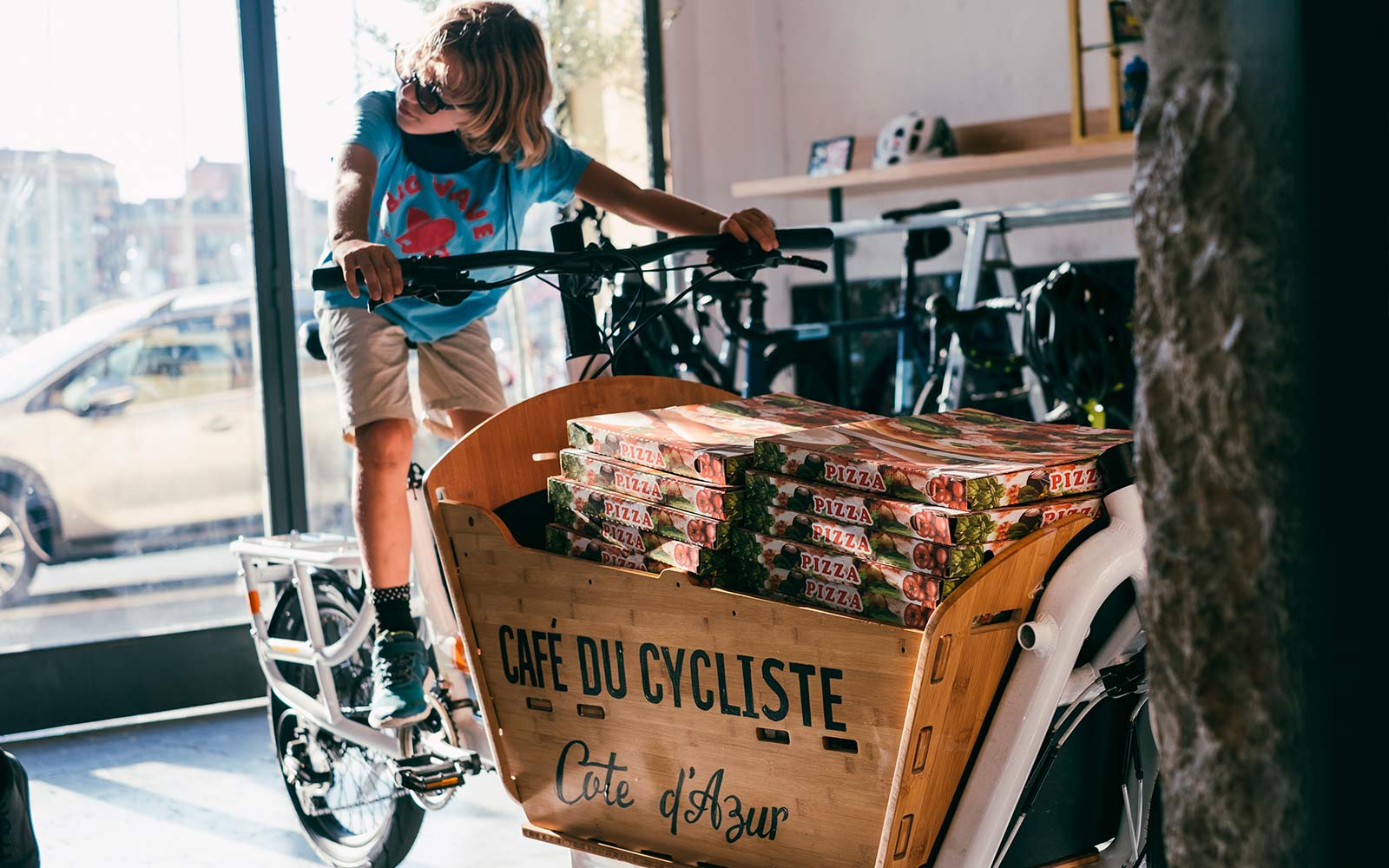