Sweden might not be well-known as a cycling hotspot, although many are familiar with the country’s breathtaking scenery and versatile landscapes. Perhaps that is why the hidden gem that lies at the southernmost tip of Sweden is often overlooked. The province Scania or Skåne in Swedish.

It may not be as spectacular as Swedish Lapland, but the route possibilities are almost endless. The perfect tarmac of empty roads and the forgotten gravel trails that weave deep into the woods.

Since Skåne is enclosed by water from three sides, it offers a majestic coastline with forests that run all the way down to the shore and too many sandy beaches to count. The winters here are less harsh, so cycling is possible all year round.

It’s easiest to reach Skåne via its capital city Malmö. The hip and upcoming city is a 20-minute train ride from the Danish international hub Copenhagen. Skåne is also accessible by ferry from Denmark, Germany and Poland.

The diverse infrastructure really does offer cycling for every rider’s taste. From long (or short) coffee rides on backcountry roads to conquering the most challenging single trails for the hardcore mountain bikers.

But perhaps the main attraction of Skåne is that enormous network of gravel. Unbeaten roads on gently rolling hills, running through a patchwork of farmlands and across a stunning countryside dotted with small medieval towns and settlements.

In the southeastern corner of Skåne you’ll find the fourth etappe of Skåneleden. This spectacular but challenging loop of 170 kilometers offers all the beauty Skåne has to offer. The route starts with low-density woodlands and finishes off along white, sandy beaches and a rugged coastline.

The Skåneleden is initially designed as a hiking trail. But Sweden has a unique law that allows all people to enjoy nature and outdoors: the ‘allemansrätten’. The ‘allemansrätten’, translated as everyman’s right, invites everyone to freely roam in almost every form of outdoor activities, like cycling, swimming and even berry picking.

The inland part of the trail follows small gravel roads and technical singletrails. Stunning scenery with lush forests and pristine lakes slowly transform into views with coastal meadows and seashores. Right after Kivik, famous for its apple orchards, lies the coastal hills of Stenshuvud National Park.

The route is very suitable for the adventurous cyclist. Dotted along the trail are various vindskydds (wind shelters). These wooden structures make the perfect shelter against the elements and are free to use. Equipped with a fireplace they make for the perfect bikepacking getaway. 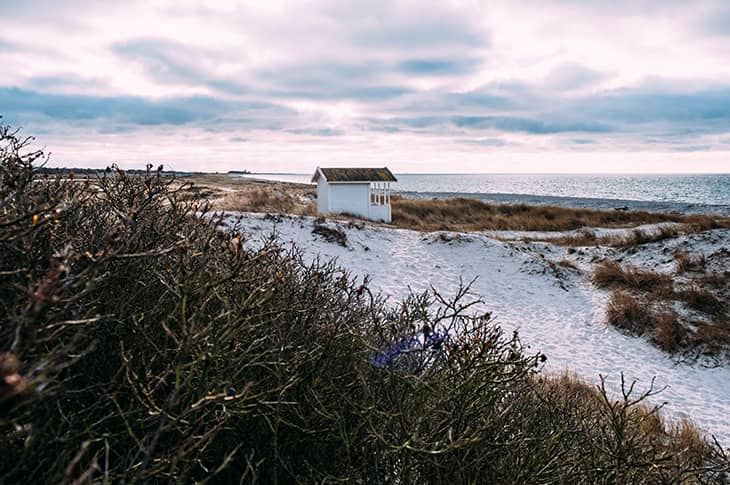 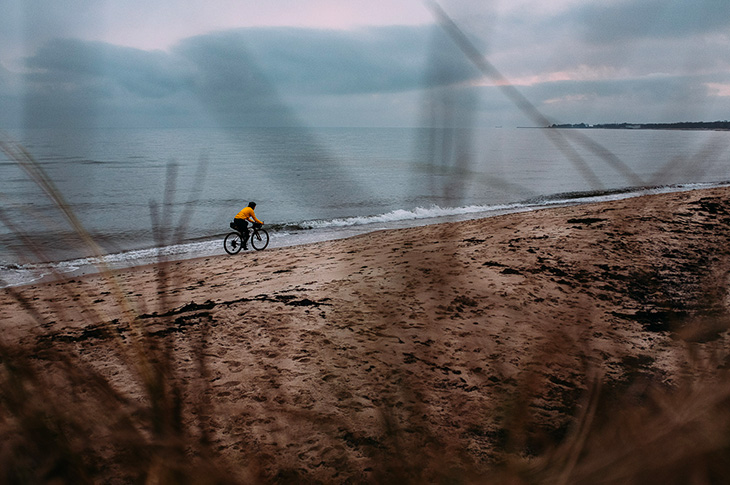 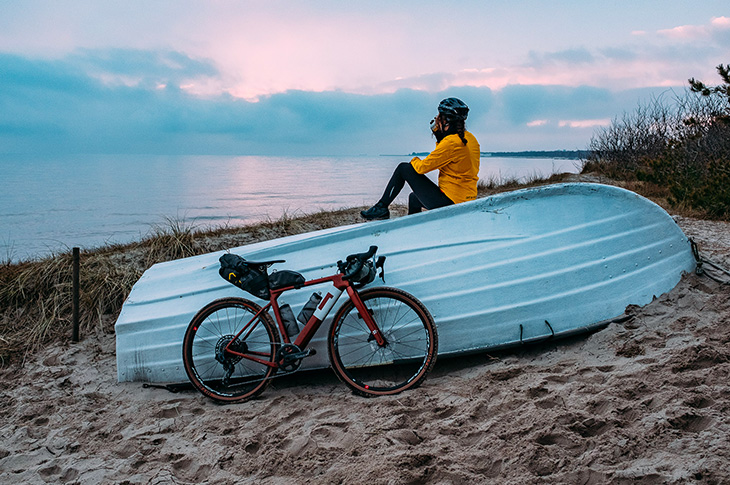 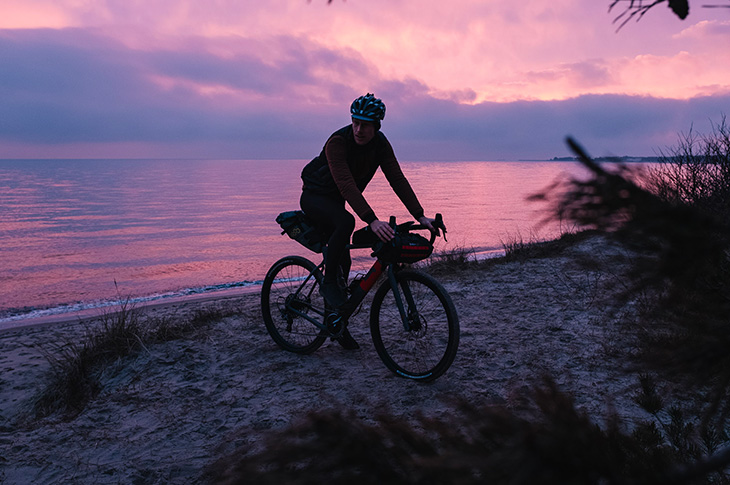 This coast to coast ride starts at the Öresund, a strait which forms the natural border between Denmark and Sweden. On the other side you finish at the bay of Hanöbukten in the Baltic sea. The ride leads you across the southern axis of Skåne from one coast to another, partly along the coastline with sandy beaches and typical Swedish sommarstugas. Expect every Scanian characteristic in optima forma.

Leaving from Ribersborgs Kallbadhuset, a spa with seaside view, the ride starts with an easy spin away from the city centre of Malmö. It doesn’t take long until farmland appears on the horizon. During spring the fields are covered with rapeseed flowers, creating a blanket of bright yellow. When autumn is over, most of the fields are brown and bare. But during winter the fields light up in shades of green, with bright white snow covering the crops.

Although Skåne is considered flat, some punchy climbs need to be conquered. Further inland the route follows the undulating shapes of the rolling landscape. As you cross the countryside, you’ll see plenty of remnants of the rich cultural and agricultural heritage such as ancient castles. There are little settlements everywhere with beautiful cobblestoned streets and pastel coloured houses with half-timbered facades.

The finish line is in Simrishamn, a small coastal town full of charm. One of the many restaurants in the old fishing port is a great place to end the day and try out the local cuisine, marinated herring or deliciously prepared goose. From Simrishamn you can easily hop on the train, to take you back to Malmö. Or you could cycle along the Sydkustleden all along the coast.

Just a stone’s throw away from Malmö’s city centre, you’ll be rewarded with all the charm Skåne has to offer. Out of Malmö you roll straight into a winter wonderland of nature and freedom. This route runs through a stunning mix of woodlands and farmlands.

Landscapes vary from ancient pastures, rolling fields and expansive forests. As you navigate along the zig-zagging loop you’ll come across Häckeberga Nature reserve. It’s one of the most valuable forest habitats in Skåne, with lush pine forests and rocky double-tracked gravel roads.

Roughly halfway along the route lies Romeleåsen; a thirty kilometer long ridge with elevation up to 175 metres above sea level. The highest point - Romeleklint cliff - gives you a stunning panoramic view over dense needle forests and extensive valleys. On a clear day you are even able to see Malmö’s famous skyscraper, Turning Torso, in the far distance.

Stop for a nice fika before you race to the finish line. Having a fika pretty much just means taking a coffee break, but for Swedes it entails so much more. It isn’t the coffee or the pastry that all the fuss is about, it’s the social part of it. Fika is deeply rooted into Swedish culture and Torups Castle, at only five kilometres from the end of this route, is just the perfect place. 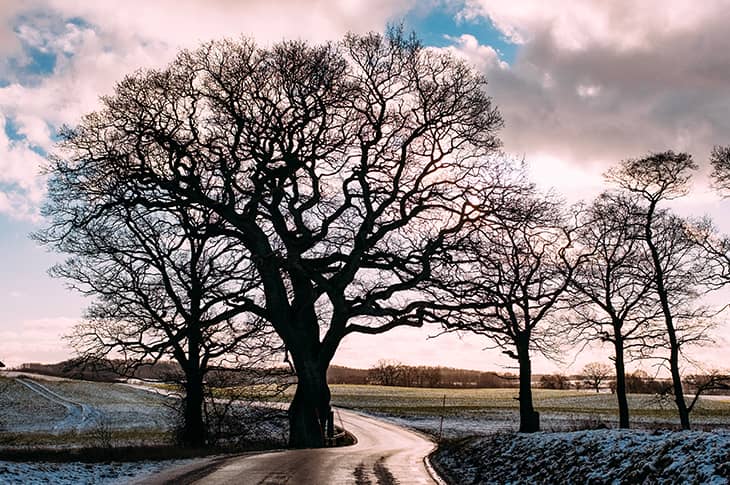 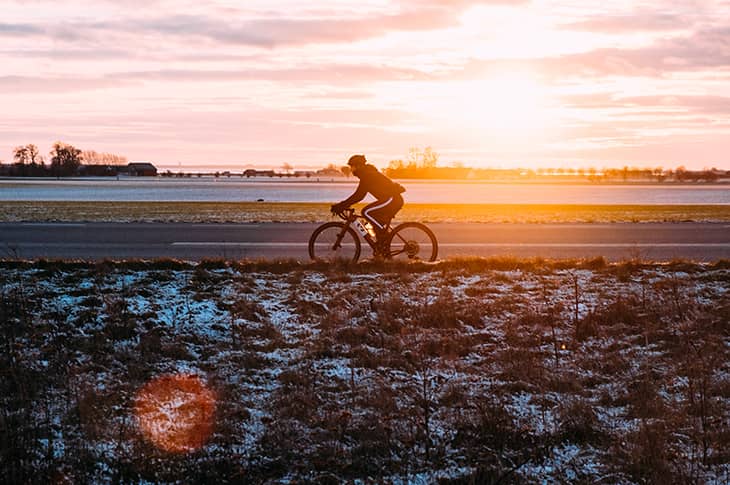 This ride is characterized by Skåne's charming castles, beautifully located on the banks of little lakes. No less than six lakes are on today’s menu. All of them linked together by quiet backroads.

The route starts at Svaneholms Slott. Built around the 1530s, this castle lies on the shore of Lake Svaneholmssjön. From here the road leads east and follows beautiful hilly landscapes. Near Skårby a sharp left-hand turn will set your course northbound. With farmlands at both sides you’ll pass Ellestadsjön and Snogeholmssjön. Both, of course, with their own stately castle next to them.

The remaining part of the ride takes you through a much greener part of the region. The country roads intersect through wooded areas with old beech and oak trees. If you're lucky, and you keep your eyes open, you’ll also have the chance to spot the local wildlife. The area is home to many kinds of raptors and three species of deer.

After a gentle descent you’ll find yourself in the Häckeberga nature area. A stunning road with trees completely overhanging the road marks the last stretch of the ride. But not before passing by castle Häckeberga, located near the lake with the same name. The medieval castle is a great place for a coffee break, before the last kilometres to the final destination. 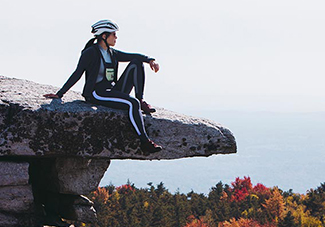 Riding gravel requires a heightened sense of attention to anticipate how the bike is moving below you. 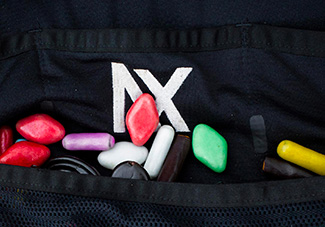 Thousands of kilometers north to avoid rabid dogs and make friends with reindeers on an Audax adventure. 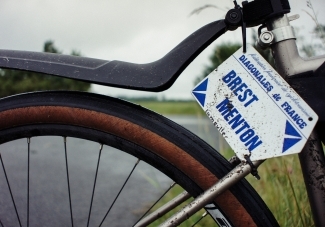 Draw a diagonal line straight across France, from Brest to Menton, in red, white and blue. Then ride it. 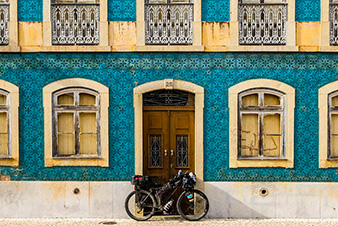 Finding a new route across Europe in between civilization. Andy Cox explains the concept behind the European Trail Divide. 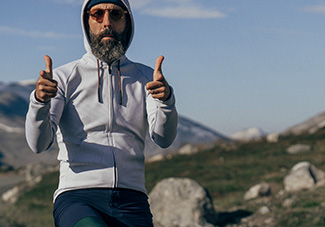 The definition of gravel cycling is wide. Gravel is all things to all riders, it can be what you want it to be.